At the UN Climate Conference (#COP23)

I’m at the annual UN Climate Change conference, which opened today in Bonn, as a guest of the German Development Institute. For those who haven’t attended one of these events before, I thought I’d provide a brief overview of what goes on in general, and what it’s like at this one in particular. It’s an unusual phenomenon; part UN negotiations, part conference, part trade fair, with a little bit of carnival thrown in as well (complete with ferris wheel). 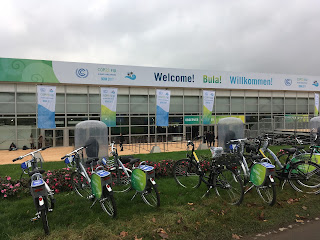 Bikes outside the entrance to the Bonn Zone.

To begin, the official name is the 23rd annual session of the Conference of the Parties (COP) to the United Nations Framework Convention on Climate Change (UNFCCC); for obvious reasons, it gets shortened to #COP23. The UNFCCC is an international agreement signed by virtually every country on the planet, in which signatories agree to work together to prevent dangerous human interference with the Earth’s climate system. It came into effect in 1994, and requires signatory countries to monitor and control their greenhouse gas (GHG) emissions (with developed nations taking the lead); to help less developed countries adopt clean energy technologies; and, to help vulnerable countries adapt to anthropogenic climate change (anthropogenic = “caused by people”).

Each year, in November or December, a COP session is held in a different country to take stock of progress made to date and to identify next steps in implementing the UNFCCC. The specific agenda items vary from one year to the next. For example, at the third COP in Kyoto, developed nations agreed to set specific targets for reducing their GHG emissions by 2012, which became known as the Kyoto Protocol. At COP 16 in Cancun, signatories agreed to set up a Green Climate Fund to help finance clean development projects in developing countries, and established the Cancun Adaptation Framework to reduce vulnerability and build resilience in developing countries (these terms adaptation, vulnerability, resilience are important in UNFCCC parlance). At COP21, the Paris Agreement was negotiated, in which countries promised to take the steps necessary to prevent global average temperatures from warming no more than 2oC this century, through “nationally determined contributions” (i.e. each country promises to do its best to help control GHG emissions).

Cynics point out that what countries agree to do at COPs is often not matched by action afterwards. For example, few countries actually met their GHG emissions targets under the Kyoto Protocol; emissions actually went up in many countries, including Canada. The Green Climate Fund relies on voluntary contributions from wealthy countries; although the vision was to have US$100 billion/year available for projects in poorer countries, for so far only US$10 billion has been donated in total. As for the Paris Agreement, few countries have begun taking action on their nationally determined contributions, and scientists are warning there is no way warming can be kept to 2oC if things don’t change quickly. I tend to be less cynical: at least the world’s nations are meeting regularly to discuss how to make progress on climate change. Think of all the global challenges that don’t get near as much consistent, ongoing attention.

Although this year’s COP is being held in Bonn, the official host is the government of Fiji. Bringing thousands of international delegates to a small Pacific island was seen as being too great a logistical and financial challenging, so it was decided to hold in Bonn, where the UNFCCC secretariat is permanently based and the necessary conference infrastructure exists, so that the Fijian government could focus on carrying out the meeting’s agenda. So what’s on the agenda? It focuses on specific steps needed to implement the broad aims of the Paris Agreement, on topics such as emissions reductions, adaptation assistance, and compensation of vulnerable nations for losses and damage experienced due to anthropogenic climate change.

Those attending the COP include official delegations from governments that will be negotiating with one another and non-official delegations that represent a wide variety of organizations, including advocacy groups, non-government organizations think tanks, research institutes and universities, among others. Two separate temporary meeting venues have been set up in Bonn. The official delegations are meeting at the Bula Zone, located in the UN district, a part of town that features many former government buildings that were repurposed when the capital of a reunified Germany was moved from Bonn to Berlin. In practice, governments are continually discussing and negotiating with one another year round, but the COP provides them the annual opportunity to formalize these discussions and make concrete agreements. It’s a slow, ongoing progress, with the delegates often working late on the final day of the COP to agree upon their official announcement of what has been accomplished. No one expects anything particularly groundbreaking to be agreed upon at this COP; the more likely outcome is a range of technical statements and general declarations of continued intention to implement the Paris Agreement.

The non-official representatives are meeting at a separate venue called the Bonn Zone, a temporary pavilion in a park a few kilometers distant from the Bula Zone. The Bonn Zone hosts what are referred to as Official Side Events – presentations, exhibitions, and similar things intended to inform attendees what the displaying organization is thinking or doing about climate change, some with the underlying goal of trying to influence what is happening in the Bula Zone (whether this actually happens is debatable). Also, the Bonn Zone offers attendees a venue where they can network with other people involved in climate change action and advocacy. It’s not open to the public; you can’t just walk in off the street and find out what’s going on in the world of climate change negotiations. Rather, organizations need to register well in advance and request admission passes for their members, and these passes are rationed. I’m entering the Bonn Zone this week on a pass obtained for me by the Interdisciplinary Centre on Climate Change  based at the University of Waterloo. 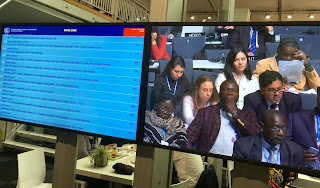 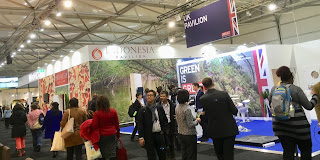 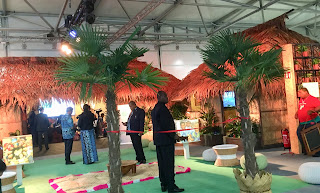 Views from inside the COP Bonn Zone.

To get out to the Bonn Zone you can walk 20-30 minutes, rent a bicycle, or hitch a ride in an official zero-emissions vehicle. Outside the Bonn Zone is a ferris wheel and outdoor market; to get inside you pass through security and metal detectors much as you do at an airport. Once inside, you get your free refillable water bottle and, again, like in an airport, you check a monitor to see the list of the day’s events and their start times, of which there are dozens. You then enter one of two large exhibition halls. These contain pavilions and displays of varying size, some of them large and elaborate, others less so. Some are intended to communicate what individual countries are doing to tackle climate change, others represent researchers, advocacy groups, and industry representatives (e.g. the nuclear industry is here, explaining why it should be considered a green energy choice). The Fijian pavilion (3rd photo above) is especially beautiful and attracts lots of visitors; so too does the neighbouring German pavilion, which is less photogenic but has an espresso bar where you can get a free cup of rainforest friendly coffee. Some exhibits consist only of a sign under which sits a bored person staring into a laptop, hoping you won’t stop to ask why they’re there. Off the exhibition halls are large presentation halls and lots of seating areas to have a coffee and chat or check your email.

Finally there are the non-official side events. These include formal events that are not hosted inside the official Bonn Zone, such as the 40+ workshops being hosted by the German Development Institute in which I’ll be participating. It’s deliberately being held in a place where the general public can attend, as well as employees of the many government and international agencies based in Bonn who don’t have access to the official side events. There was also an organized protest in Bonn on Sunday, where thousands of people marched to demand that Germany reduce its dependence on coal.

What types of people attend COP side events? I went to a few today and chatted to attendees that included civil servants, a development agency employee, a soil scientist, graduate students, and even one undergraduate student from Vancouver, who is part of a youth delegation sponsored by the province of British Columbia. She’s majoring in international relations, and told me how cool it was to attend a real UN meeting (she had done lots of model UN activities in past courses). As you can see from my somewhat random sample, attendees come from a wide range of backgrounds, and they come from around the world (though a disproportionate number of them are from North America and Europe).

Hopefully that gives you a decent picture of what’s going on here at COP23. If you’re interested or engaged in climate policy, it is definitely worth the effort to attend one of these events at least once, so you can see the context in which international climate discussions take place. I’ll be posting some photos and comments on my Facebook page and Twitter feed for anyone who’s interested in seeing more. Oh, and here's a photo of the ferris wheel outside the Bonn Zone.