Last week I launched my first ever podcast called RinkTalk, where I interview interesting people about backyard rinks, outdoor skating, and shinny hockey. We launched a week ago and will be releasing new episodes each Friday for six weeks to gauge interest for the topic. In the first episode In interviewed CBC personality Grant Lawrence about the unusually cold winter in Vancouver of 2016-17, when he was able to build his backyard rink of dreams. We also discussed hockey bullying and his book, The Lonely End of the Rink. I also chatted with Chuck Temple, who illustrates the Brady Brady children's book series that is wildly popular with kids under 7 who love to skate and love to read. 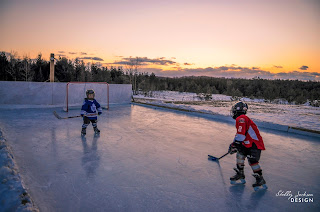 In the 2nd episode, released today, I talk with Pete McCormack, author of Understanding Ken, one of the greatest sports novels ever written, about the struggles of a 10-year old BC boy to make a backyard rink while also trying to make sense of his parents' divorce and Ken Dryden's decision to quit hockey and return to university.I also speak with prize winning rinkmaker Jean-Francois Ouimet about why outdoor rinks are so culturally important to Montrealers.

Future episodes will feature interviews with artists, scientists, and rinkmakers from across North America, all with an emphasis on understanding and celebrating the outdoor skating rink. The podcast also features amazing original music composed by Keenan Reimer-Watts and performed by Keenan and the duo A New Ground (aka Claryssa Webb and Ryan Dugal). the cover art (shown below) is by Ontario designer Shelley Jackson. Please give the podcast a listen, you can subscribe to it on iTunes or go directly to the Rinktalk site.