Hurricane Harvey is not unprecedented

Officials from the mayor of Houston up to the US President are parroting a National Weather Service tweet that Hurricane Harvey is “unprecedented”. This is not true, except in the narrowest terms of the absolute dollar value of property that has likely been damaged. The physical characteristics of Harvey, in terms of the amount of rain, flooding, and damaged cause are very similar to Hurricane Mitch, which struck the Caribbean nineteen years ago. The track of Harvey is very similar to the one that destroyed the nearby coastal city of Galveston in 1900. Back then, Houston was a largish town of 45,000 people; it has since sprawled to over 2 million. And in 1983, the US Congress itself warned that Houston was not prepared for a hurricane like Harvey. 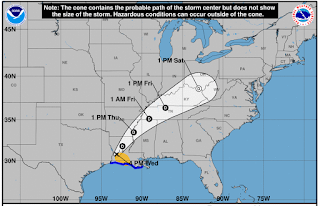 Harvey's potential path after days of sitting off the Texas coast

In one sense, this is nothing new. Whenever a natural disaster strikes, government officials invariably claim that no one could have seen it coming, that there’s never been anything like it. The main spokesman for the US Federal Emergency Management Agency has been saying exactly this in every press conference. Such nonsense. This is classic obfuscation, responsibility-dodging, lying, ‘fake news’ – describe it as you wish.

In 1984, the US Congress held hearings regarding Houston’s vulnerability to hurricanes following Hurricane Alicia, which killed 22 people in Houston and caused over US$1 billion in property damage. The hearings concluded that Houston had been very lucky, and that had the hurricane’s path deviated by even a bit, the damage could easily have been ten times worse. The hearings further concluded that Houston was underprepared for hurricanes and that there was an urgent need for better emergency planning. Remember, this was 29 years ago, and it’s plainly evident that little was ever done. You can read more about how Houston came to be the disaster-in-waiting that was/is in this 1987 study published in the journal Urban Studies by Andrew Kirby and Karen Lynch.

The mayor of Houston did not order an evacuation of the city before Harvey, despite contrary advice from the state governor’s office. The explanation the mayor gave at a press conference the day after Harvey struck was that, in 2005, the city attempted to evacuate with Hurricane Rita approaching, but that the evacuation was chaotic, disorganized, and many people were left stuck in their cars on freeways. Plus, he said, Ike didn’t turn out to be as bad as feared. So he and city officials thought it best that this time, despite all warnings about the danger Harvey posed, people should stay in their homes. Let me get this straight: the last evacuation was chaotic and disorganized, so instead of taking the necessary steps to assure an organized, orderly evacuation the next time – and there was always a 100% chance there would be a “next time” – city officials decided not to make proper evacuation plans, and instead let people suffer the consequences. This is the height of incompetence. And now, two dozen people are dead and tens of thousands are in hastily cobbled-together shelters.

The mayor even had the gall to say that Houston’s best days are ahead of it. No, Mister Mayor, its worst days are yet ahead of it. Ask anyone who lived through Hurricane Katrina – many people in New Orleans still have not gotten back to where they were twelve years ago.

Officials claim to be surprised that so much precipitation has fallen. I doubt that anyone working at the National Hurricane Center or the National Oceanic and Atmospheric Administration (NOAA) was surprised; I bet dollars to doughnuts this precise scenario was in their models of potential hurricane dangers to the US coast. I mentioned Hurricane Mitch; it was a category 5 Caribbean hurricane that sat off the coast of Central America for several days in 1998, pumping huge amounts of rain onto Honduras, Nicaragua, Guatemala and El Salvador. Tens of thousands were killed or injured, and hundreds of thousands were left homeless – not so much by the high winds, but by the floods and mudslides caused by all that rain.

Hurricane Mitch ran up against an air mass that blocked its path, that’s why it sat so long off the coast. A hurricane or tropical cyclone sitting over the ocean wicks large volumes of water into the air and casts out large belts of precipitation; imagine dipping a towel into a bucket of water and then twirling it over your head – water sprays outwards. Once the storm passes over land, it loses energy and no longer has any water to whip up. After several days, Harvey continues to be prevented from coming ashore by the massive high pressure system that has been responsible for the hot, dry weather over western North America in recent weeks. So instead of moving inland toward the northeast, as US Gulf Coast-bound hurricanes often do, Harvey is leaking eastwards parallel to the US Gulf Coast, continually pumping rain onshore.

Now you may say, “Oh you’re just an academic who lives a thousand miles away, and it’s easy to explain everything after the fact, and it’s easy to point fingers from where you are, and now’s not the time to be pointing fingers, etc, etc”. But that’s precisely what academics are supposed to do. We study things, learn lessons, and try to come up with ways of doing things better. What I’ve said above is nothing more than what was already known – to academics and to government officials – about Houston’s vulnerability to hurricanes, but nothing was done. So now is precisely the time to start pointing fingers and laying blame, because it’s painfully obvious that politicians will do their very best to forget what happened and ignore the lessons Harvey is teaching them. I feel very, very sorry for the people of Houston. Like others, I have given money to the Red Cross, but no amount of money will undo the ineptness of the governance system under which they live.