For the last four days, three Inuit people who committed no crime have been incarcerated in a Newfoundland prison far from their home. Two of them are elders of the NunatuKavut people of Labrador, Jim Learning (age 79) and Eldred Davis, (age 66). The third person incarcerated along with them in the all-male prison is a woman from their community, Marjorie Flowers, age 50. They will be locked up at least until Monday, July 31, when they will be in court to face charges. [UPDATE: Charges were dropped on July 31 and they were released to return home. The fact that they were incarcerated at all is outrageous, just the same]. 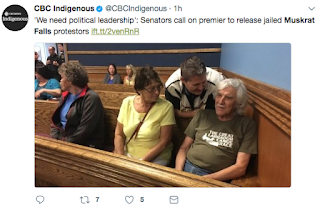 Inuit elders in court, about to be jailed

What did they do that is so heinous? They refused to sign a court document obtained by the government of Newfoundland and Labrador in which they would promise to stay at least 1km away from a dam being built on their people’s traditional land. Now it’s important to note that these three individuals did not vandalize the dam, did not harm any of the people working on the dam project, nor commit any criminal acts at the dam site. They were among several Inuit and non-Inuit people who organized lawful, peaceful protests at the dam site last year that attracted hundreds of indigenous and non-indigenous protestors.

I’ll provide in a moment additional details about why they were protesting the dam and what’s at stake, but first, let me be blunt: this would not happen to white people. They’re in jail because they’re indigenous and they refused to comply with a government that is disregarding its own laws. Could you imagine the media shitstorm if the government chucked a white woman in a men’s prison for refusing to sign such a document? If two white senior citizens were locked up for that same reason?

For indigenous Canadians, however, stuff like this does happen. Ten summers ago, similar events took place in Robertsville, Ontario, where a coalition of white cottage owners and people from nearby Algonquin First Nations organized peaceful protests against a proposed uranium mine. The mining company obtained a court injunction to stop the protesters from blocking access to the mine site and, when the protesters refused to leave, the police hauled eight organizers off to jail. An Algonquin elder Robert Lovelace – a university lecturer and one of the softest spoken people you might meet (for I have met him) – was fined $25,000 and sentenced to six months in prison (he was later released on appeal). Lovelace committed no crime. The mining site in question is on public land on the shores of a lake that sits squarely in the unceded traditional territory of the Algonquin people of that region. ‘Unceded’ means that Algonquins in the Robertsville area never signed a treaty transferring ownership of the land to the government; in other words, they still maintain traditional rights to that land. By federal law, the government of Ontario must – categorically, must – consult the Algonquins before permitting mining to take place on their traditional lands. It didn’t, and eventually acknowledged it should have. Therefore, it was the government of Ontario that broke the law. Nonetheless, an indigenous person went to prison for having merely stood up to insist that the government respect its own laws.

Now, a decade later, history repeats itself. The three Inuit people being imprisoned in Newfoundland live near Muskrat Falls in Labrador, where a government-owned company is building a giant hydroelectric dam for the purpose of exporting electricity to the US. The Inuit who live downstream are worried that the dam may produce elevated levels of mercury in the watershed, which could over time render toxic the fish the Inuit eat on a regular basis. This is a credible concern, and was documented in an independent study by scientists at Harvard. Mercury occurs naturally in small amounts in vegetation. If you flood large amounts of vegetation, it can be converted by microbial action into methylmercury, a known toxin that bioaccumulates. The Inuit have asked the government to clear out all the trees from the area above the dam before filling the reservoir later this year; doing so would likely reduce the amount of methylmercury produced. The government of Newfoundland and Labrador has refused to do this. This is not surprising, since the government promised this project would cost taxpayers $6 billion and be completed by 2016; it’s already cost twice that much and won’t be completed before 2020. They don’t want to spend any more money or experience any more delays, and so would rather knowingly risk poisoning the environment and the local people. Yet again, a provincial government is refusing to comply with our country's laws, and indigenous people are being jailed for peacefully speaking out.

It’s important to note that the protesters are not seeking to stop the project altogether, even though they were never properly consulted from the beginning. They are asking, through legal and non-violent means, for the government to do the right thing and take reasonable steps to avoid creating a public health hazard. Over the long run, despite the cost overruns and extra time needed to do it right, maybe this project will provide important net benefits to all the people of Newfoundland and Labrador, including the people who live near the dam. But at present, it's an expensive boondoggle, being rammed through by incompetent politicians. In the meantime, we jail three Inuit elders who refuse to sign a piece of paper saying they will abdicate their constitutional right to free speech and peaceful assembly on their own traditional land. Disgraceful.

Posted by Robert McLeman at 5:53 AM