On hackathons and French nuclear tests

I nearly got sent home unceremoniously from my first diplomatic posting. It was 1995, and I was a junior foreign service officer at the Canadian Commission in Hong Kong. The French government had announced it was going to carry out a series of nuclear weapons tests at Moruroa, a small atoll island in the South Pacific. A comprehensive global ban on nuclear weapons testing was set to come in effect the following year, and the French military wanted to sneak in another few tests before it came into effect, to supplement the 150+ tests it had already conducted on the island. People who lived in Polynesia strongly objected, and in many countries people organized boycotts of French products, but the tests went ahead anyhow. 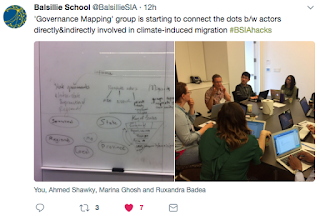 None of this had anything to do with me or my job at the Canadian Commission. The incident that nearly got me sent home was this: a group of students at the Australian International School in Hong Kong wrote a letter to the editor of the South China Morning Post – the main English language newspaper – expressing their objections to the nuclear testing, arguing for action to be taken against the French government, and supporting the boycott of French goods. A day or two later, the Post published a very dismissive letter from the French Consul General that mocked the Australian students as being naïve, and stating that they were no doubt put up to it by their teachers. I wish I still had a copy of it, for it was one of the more arrogant things I’ve read. It set me off. That same day, I wrote a letter to the Post tearing a strip off the French Consul General, essentially calling him a sanctimonious prick, and giving him a short lecture on the evils of nuclear testing. As you might imagine, my letter was happily published.

I personally felt (and continue to feel) that nuclear weapons are fundamentally wrong, and testing them on the traditional territory of colonized people is especially amoral. But it was not the nuclear testing that prompted my letter writing; it was the dismissiveness of the Consul General’s letter, mocking students who very articulately argued their positions on the issue. However, diplomats, no matter how junior, must keep their opinions to themselves regarding matters of international concern. I was sent abroad to represent the government of Canada; what I thought of French nuclear testing or the Consul General’s actions should have been kept to myself. What I did was wrong, and I was not surprised when I was called into the Head of Mission’s office the next day to get a strip ripped off me. I was told that the only reason I was not sent home on the next flight was that I had not included in the letter anything that identified me as a Canadian or a Canadian government representative. And fortunately I was junior enough that no one in the French consulate knew who I was or, if they did, never made a complaint to the Canadian mission.

Ironic aside: the very next week an acquaintance who served as the honorary consul for Gabon invited me to a small lunch party to which he also invited the French Consul General. I thought it wise to decline the invitation.

Two things today reminded me of this incident. First, I heard the 1985 song “Hercules” by Australian band Midnight Oil, protesting western military presence and weapons testing in the South Pacific. The second was that I participated today in a climate migration policy hackathon organized by grad students at the Balsillie School of InternationalAffairs. I had never been to a hackathon previously, but had some idea that it involved a group of motivated people making a concerted effort in a short period of time to think through a problem and devise solutions. Although few of the students appeared to have any in depth, pre-existing knowledge of climate migration policy, a group of them had prepared a background paper that was circulated before the hackathon. How many of the others actually read or digested it is unclear. But what was clear is that they were ready to get to work this morning.

If you’ve read this blog previously, you’ll know that I’ve been researching climate migration for a long time now, and wouldn’t be surprised to learn that I have some fairly solidly formed views on what’s missing from climate migration policy. Few, if any, of the students knew of me or my work (certainly none of the students in my breakout group did); I was invited only because one of their professors suggested it. It would have been easy for me to be dismissive of the event or of the students’ lack of expertise; I could have simply lectured the students in my breakout group on what I think should be done, and they would no doubt have dutifully taken notes and followed my lead. But I don’t do that, especially to students, having learned my lesson from the French Consul General all those years ago. At the hackathon I contributed some and listened a lot during my group’s activities, and in doing so I learned some things I didn't know, or hadn't given enough thought to. For example, I realized that in Canada there’s a serious disconnect between federal refugee policy and housing policies and programs delivered at lower levels of government (I suspect this is a problem in other countries as well). I like this hackathon concept, it reminds me I don’t know as much as I think I do. I hope to attend more, and will perhaps try organizing one around one of my own classes in the future.