Real leadership on climate change doesn't start at the top 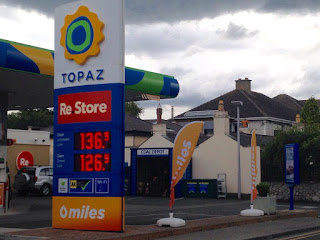 Gasoline, diesel, oil and coal on sale in Dublin.

So Donald Trump formally announced he is finished with the Paris Climate Agreement. My reaction: Fine, you’ve had your say, now stand aside – it doesn’t matter as much as you think.

Trump’s announcement comes as no surprise; he promised last year he would do precisely this if elected. So while world leaders and media commentators expressed their concerns, I was more interested in the reactions of state governors, city mayors, and industry leaders in the US. As I hoped, officials in states like California, New York and Washington announced they would continue taking concerted action to tackle climate change. Cities like Pittsburgh, Atlanta, and Salt Lake City say they're ignoring Trump. The heads of companies from a wide cross-section of American industry, including Pepsi, Cargill, Google and Goldman Sachs, stated they would continue to reduce greenhouse gas (GHG) emissions in their operations. Collectively, they matter far more than does Mr. Trump.

Certainly, it’s much easier to make national progress on greenhouse gas emissions reductions when the federal government takes a leadership role. Federal governments have the ability to implement laws, regulations, tax incentives, performance standards, and other mechanisms to incentivize action and punish laggards. But in practice, federal governments in the US and Canada have been hesitant to use these in anything but relatively modest ways when it comes to GHG emissions.

The first international attempt to control GHG emissions – the Kyoto Protocol – resulted in little significant action by the Canadian or US governments. The Americans never bothered to implement it. In Canada, we signed and said we’d deliver, but apart from some half-hearted attempts by Prime Minister Chretien’s government to get Canadians to voluntarily reduce their fossil fuel consumption (anyone remember the “One-tonne challenge”?), nothing much happened. Canada’s GHG emissions actually went up during the period Kyoto was in effect. Chretien’s successor, Stephen Harper simply refused to do anything at all and eventually bailed out; the only difference between him and Donald Trump on climate policy was that Harper never bothered to hold a big press conference to boast about his indifference.

By contrast, real action has been taken for many years now by governments in North America, at the state, provincial, and local levels. For example, the government of British Columbia implemented a carbon tax that by all accounts is working as was intended. Ontario, which before Kyoto had the highest provincial GHG emissions in Canada, shut down its coal-fired generating stations and implemented a long-term green energy strategy. Ontario's GHG emissions today are lower than they were in 1990 - i.e. it met its share of Canada's Kyoto commitment. California, which on its own has an economy the size of Canada’s, has for decades set strict clean air regulations for industry and consumer products that become de facto America-wide standards. In 2006, California implemented legislation requiring the state to reduce its emissions to 1990 levels by 2020, and you can read about its action plan here. Through a technical partnership known as the Western Climate Initiative, the governments of BC, California, Ontario and Quebec coordinate their cap-and-trade strategies, through which GHG emissions by utilities and industry are regulated. These and other activities happen and will continue to happen regardless of what federal leaders like Harper or Trump do or don’t do.

When you look at the concrete decisions that need to be taken to make dramatic reductions in GHG emissions, you will find that responsibility is disproportionately concentrated at state, provincial and local levels. Federal governments in Canada and the US do not (for the most part) construct roads and bridges, or run public transit systems, or operate schools and hospitals, or build and operate electrical generating systems, or collect and dispose of garbage, or provide basic water and sewage services, or… you get the picture. Federal governments have the ability to make umbrella regulations to limit environmental damage, and can raise enormous amounts of revenue through their taxation powers that they can then spend as they see fit – but they don’t actually do much of anything. Even the things that they’re supposed to do, like run airports and the post office, they tend to do poorly, and end up contracting out to others. Lower levels of government are the actual ‘do-ers’.

Federal governments can’t stop lower levels of government (or industry, or communities, households and individuals) from doing the right thing when it comes to GHG emissions. The Harpers and Trumps of this world can splutter and obfuscate all they want; if the rest of us decide to get on with it, their raving will be in vain. For sure, it would make the task much easier if federal leaders would actually lead, and as they continue to implement policies that facilitate more mining of coal and piping of oil, they make the task more difficult still. But bad federal policies can be pushed aside. State and provincial regulations often trump federal actions or inaction. Car makers, for example, build cars that meet California’s tough emissions standards because it makes no financial sense to build some vehicles for sale in that state and less efficient models for other parts of the country that follow the lag-behind federal standards. It’s simpler to just build all cars sold in the US to California standards. So long as state and provincial governments continue to push hard for GHG emission reductions, progress will be made.

Most important of all, individuals and households need to act, for they will ultimately determine if GHG emissions fall or not. The most effective action of all is to deliberately choose to consume less fossil fuel. If your next car is an electric one – or better yet, is a bicycle or a bus pass – you will avoid purchasing hundreds (possibly thousands) of litres of oil each year. That’s carbon that will remain firmly in the ground, where it belongs. If people choose to buy less of a harmful product, industry does not need to be told by federal regulators to stop producing it, they’ll do so of their own accord. If consumers show a willingness to spend money on new innovations in low-carbon technology, industry does not need to be told to invest in it, it will. Donald Trump vows there will be more coal and more oil and gas dug and fracked out of the ground on his watch, but if nobody buys it, it won’t happen. So let’s ignore him, and get on with the job at hand.
Posted by Robert McLeman at 11:42 PM