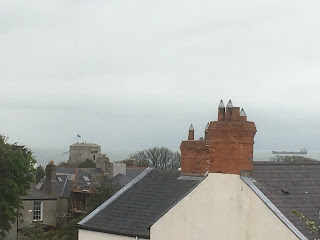 The view from my balcony; Joyce's Martello tower with flag on top, to left.

From my balcony I can see the Martello tower in which James Joyce lived briefly, and where the opening scene of Ulysses is set. Beyond it are the blue-grey waters of Dublin Bay. Today the sky is heavy, the clouds low and full, dropping the occasional sprinkle of rain. A good day to stay close to home.

We moved to this apartment in Sandycove the week before last. It hadn’t been part of the plan, but the bank repossessed from our landlord the apartment we had been renting in Booterstown, so we had to relocate on short notice. It did us a favour, for if you could choose to live anywhere in Dublin or surrounds, this neighbourhood would be on your short list.

Joyce’s tower is famous throughout Dublin not only because of its famous former resident, but because of the older men who used to regularly swim naked below it. Formally called the Gentlemen’s Bathing Place, the Forty Foot as it’s better known is a rocky outcropping with ladders and stairwells that help swimmers male and female reach the frigid and often choppy waters below. For those who prefer swimming in clothing and calmer waters, there is a small sandy cove before the Forty Foot that gives the neighbourhood its name. The first time I visited the cove I watched a seal bob around, munching on a fish. I’m told that curious seals sometimes bite passing swimmers, especially those wearing wetsuits and flippers. I have no intention of testing the waters to find out if this is true. I will walk over after dinner and the swimmers have gone, to stretch my legs and get some sea air.

It is Good Friday today, and Trinity College is closed. This morning I walked down Sandycove Road into our little shopping high street to buy the Irish Times at the small Spar that sells milk, bread, and a few grocery items, plus hot snacks, and beer, spirits and wine – though the latter not today. The pubs are all closed today, too, as they have been every Good Friday since 1927. For decades after its independence from Britain, the Roman Catholic church held unusual sway over the politics of Ireland, running most of the country’s schools and working tirelessly and shamelessly to turn back the clock on social values, women’s rights and such. The Good Friday booze ban is one of the final remaining legacies of that time. Few Irish people pay any heed to the church’s teachings today, and it’s not surprising. Recent Irish governments have had to deal with a seemingly endless series of revelations of past criminal behaviour by priests and nuns, particularly child abuse and pedophilia, that was covered up by bishops and their politician friends. The most recent scandal to emerge not long after I arrived here, concerns a former home for unwed mothers run by nuns in the village of Tuam, where the remains of hundreds of aborted fetuses and newborn infants were recently uncovered in a mass grave.

Since on Good Friday I’d rather not dwell on the church’s own sins, I’ll resume my account of my day. After picking up the paper, I stopped in at the local baker, who makes simply the best breads, cakes, and pastries I’ve ever eaten (and I lived in Vienna, so I know what of I write). One of the joys of living in a place like Sandycove is that the high street still has an independent baker – and two independent butchers, two greengrocers, a fishmonger, a delicatessen, and multiple independently owned cafes. And, oh yes, two independently owned pubs. It is Ireland, after all. The nearest one, Charles Fitzgerald’s, plays no music, and the TV is on for major sporting events only. Conversation is the principal activity that takes place inside it. There are comfortable couches, pictures of Joyce on the walls, and customers of all ages, many of whom recognize one another. I was fascinated one evening to watch a group of women step outside for a smoke, leaving their purses and wallets unattended on their table in a high traffic area.  It clearly did not cross their mind that anyone would try to steal them, and no one did. Unattended purses would not last a minute in the “traditional Irish pubs” (quotation marks deliberate) in Dublin’s Temple Bar area, to which tourists flock and locals avoid like the plague. 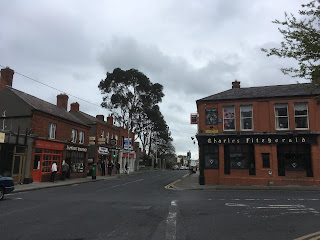 At the end of my block

In short, Sandycove is as a community is supposed to be: a walkable, attractive, friendly place, with people know their neighbours and where, when you spend a dollar (or more precisely, a Euro) in a shop, you’re supporting a local business operator and their family. On my way back to my apartment, I stopped in at Eamonn’s bookshop and bought from Eamonn himself for 3 Euros a secondhand copy of Ulysses. It’s often described as one of the greatest books ever written in the English language, but also one of the most challenging to read. I figure, if I don’t read it here and now, within eyeshot of Joyce’s old home, when will I?

An irony is that Joyce, who was not a wealthy man when he wrote Ulysses, probably couldn’t afford to live in Sandycove today, nor could his protagonist in Ulysses, Stephen Dedalus, a part-time school teacher. House prices and rents here are well beyond the means of most young Irish families, the very people who would benefit most from living in such a community. Instead, they are pushed out to ever more distant housing estates on Dublin’s periphery, where they spend several hours each days in their cars, rushing between work and schools and playgroups and grocery superstores. This seems to me to be one of the fundamental challenges of our times: how to make our cities into mosaics of Sandycove-like neighbourhoods, where everyone, regardless of income, can enjoy the type of day I had had today. 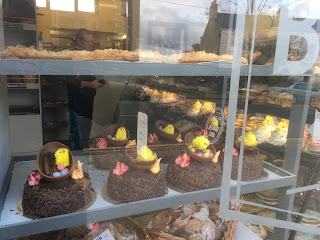 Easter cakes in the window at Baker Street, Sandycove. Happy Easter!
.
Posted by Robert McLeman at 8:34 AM