On The Tragically Hip 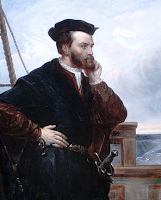 On the final evening of competition at the Rio Olympics, Canada’s national broadcaster, the CBC, abruptly stopped covering the Games to televise instead a rock concert from Kingston, Ontario. Most readers of this blog are in the US according to Google stats, and I suspect most have never heard of the Tragically Hip. By contrast, there are few Canadians who haven’t heard of them. The story of the Hip is a distinctively Canadian one, and it will soon have an unhappy and tragic ending. If you’re interested, reading a bit about the Hip may help non-Canadians understand us a little bit better.

The Hip formed back in the 1980s in Kingston, a city of (then) just under a hundred thousand people, best known for its university, military college, and maximum security prisons (to be “sent to Kingston” was the Canadian equivalent of being sent to Sing Sing or Alcatraz). Kingston is roughly a two hour drive from Toronto, two hours from Montreal, two hours from Ottawa – i.e. not quite the middle of nowhere, but not exactly the heart of the action either. Winters are a bit harsher there than in other parts of southern Ontario; its location at the east end of Lake Ontario means Kingston gets more than its fair share of snow and winter storms. Our first Prime Minister, Sir John A. Macdonald, came from Kingston, and the city aspired to be made capital of Canada at the time of our confederation* in 1867, but lost out to a logging town on the Ottawa River.  Ever since, the city has quietly gone about its business educating students, training soldiers, and locking up criminals. The author Stephen Leacock used Orillia, Ontario as his model for famous stories about life in small-town Canada; had he chosen to write about mid-sized Canadian cities, Kingston would have made a good model.

*I should explain for American readers that “confederation” is Canada’s version of independence, and refers to the date the British North American colonies that would become the provinces of New Brunswick, Nova Scotia, Ontario, and Quebec negotiated self-rule from Britain (unlike the US, Canadians never rebelled or unilaterally declared our independence).

It’s therefore kind of amusing, and a bit audacious, that five students from Kingston would call their band The Tragically Hip, since hipness is not something you’d necessarily associate with a place like that. And their style of music, at least initially, was not especially unusual or hip. It was – and remains – guitar-based rock music well suited to arenas and blues-rock clubs. They could have easily played on the same bill as the Stones, Pearl Jam, REM, the Band – for all I know, maybe they did.

The 1980s was a fairly banal period for Canadian popular music. A decade previously the Canadian government had passed a law requiring Canadian radio stations to play a certain percentage of Canadian music each day, the fear being that Canadian culture was being overwhelmed by US pop culture. The result of “CanCon” legislation was that even pretty mediocre Canadian musicians were able to get airplay. Many artists, their producers, and record labels hoped that this might springboard them into the much larger, more lucrative US market, and so they made their lyrics as generic as possible, in hopes American listeners might mistake them for musicians from California or New York or London. And it didn’t really matter the genre; our new wave bands were as generic as our country and metal artists. When I think back on the better known Canadian artists of my youth – Corey Hart, Platinum Blonde, Honeymoon Suite, Trooper, Loverboy, Triumph, April Wine – I can’t help but to snicker at the lyrics. If it hadn’t been for artists who got their start in the pre-CanCon days (think Neil Young and Rush) Canadian music would have been dire. Even Bryan Adams, our arena rocker par excellence of the time and one of the few who actually did find sustained success in the US, churned out some pretty milquetoast music.

And this is what distinguished the Hip. Their lead singer and lyrics writer, Gord Downie, was not afraid to write interesting, creative lyrics that drifted into poetry and abstract imagery and, most distinctively, frequently made reference to things people from places like Kingston could identify with. In one song he might muse about French explorer Jacques Cartier – someone we all studied in grade 8 history – and in another give a shout-out to Jacques Cousteau, whose underwater documentaries were regularly shown on the CBC in the 1970s. Painter Tom Thomson features in one popular Hip song; another describes the disappearance of a hockey player whose final goal won the Leafs the Cup (if you’re a Canadian, you know what Cup this means). Downie even referred to the CBC itself in one of the Hip’s masterpiece songs, Wheat Kings, which reflects on the wrongful conviction of a Saskatchewan teenager, jailed for 20+ years for a murder he never committed. In live performances, Downie would strike exaggerated poses to mime the lyrics to his songs, and during the band's long guitar solos would try out lyrics from new songs he was writing, or start singing songs of other artists. At one concert I heard him sing Gord Lightfoot’s The Summer Side of Life over an extended jam at the end of the Hip’s own song Nautical Disaster. Another time he sang the Rheostatics’ Bad Time to Be Poor in the same place. 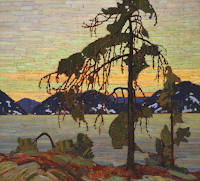 The Jack Pine, by Tom Thomson

Despite quickly selling truckloads of records and selling out ever-larger venues from coast to coast in Canada, the Hip never caught on in the US, with the exception of border cities and towns.  At first Canadians were puzzled and a bit annoyed at this; the Hip are superb musicians and, with the exception of REM, Springsteen, and the B-52s, they were producing music that was superior to that of most American artists being played on rock stations (thankfully Nirvana came along to shake things up). Perhaps it troubled the members of the Hip as well, but if it did, it didn’t prompt them to genericize their music; if anything, they took it even farther from mainstream rock. They created their own version of Lollapalooza called “Another Roadside Attraction”, and toured with bands like Midnight Oil, Los Lobos, and Wilco, artists who also didn’t conform to the usual top-40 model. Today I think most Canadians are quietly pleased the Hip never made it big down south, it allows us to claim them all to ourselves, and to tsk-tsk Americans for their lack of outward vision.

The Hip were playing the campus bars in the mid 1980s when I first heard them; a decade later, when I was living in Seattle, they were selling out stadiums and arenas in all the big Canadian cities. I saw them perform three times on the West Coast. Once was at an outdoor stadium in Vancouver with 15,000 other people; the other two times were in Seattle, once in a small theater, the other in a public park. The park concert I remember best; it was a world music festival, they had acts from places like Mexico and Kenya, and there representing Canada were the Hip. A few hundred people had made the trip down from British Columbia to watch them, and when the Hip played Fireworks – a song that refers to Canadian hockey legend Bobby Orr and a 1972 hockey game between Canada and the USSR – the American woman standing next to me marvelled how so many people knew all the words.

Although they weren’t necessarily my favourite Canadian musicians from that period – I was more into the Skydiggers and the Cowboy Junkies back then – the Hip always had a special place in my heart and my music collection. When I look back now, I realize that the reason why the Hip resonated with me and with so many other Canadians was that they were relatable. They were my age, had a sound that I liked, and sang songs with beautiful lyrics about familiar things and familiar ideas and aspirations. I imagine urban kids in Toronto felt the same way a decade ago when they heard Drake for the first time.

None of this explains why the CBC would pre-empt the Olympics to show a Hip concert from Kingston, or why an estimated 11 million people watched it. To put that into context, there are only 35 million Canadians. It would be like 110 million Americans watching the same thing at the same time – Super Bowl viewership, in other words. The reason is that Gord Downie is dying. Early this year it was announced he has untreatable, terminal brain cancer. Rather than retreating from the public to spend his final days with friends and family, instead the Hip did one last tour, with a dozen shows in major Canadian cities, the final one in their hometown. Our Prime Minister attended.

The CBC-televised final show was simultaneously moving, wondrous, remarkable, and very sad. Downie is not well. His distinctive twangy voice has become croaky. He had teleprompters placed around the stage with the lyrics to his songs because he might otherwise forget. It was clear that at many times he wanted to cry (and he did during a couple songs), and in the anthemic Grace, Too he let out an anguished scream that was genuinely tormented. He and the band came out for repeated encores and played close to 30 songs, even though he was clearly exhausted by the end. He knew this would be the last time he ever sang for the public, and he did not want to relinquish the mike until he had nothing further to give. Eerily, many of his songs contain lyrics suited to a man with a fatal illness – “get Ry Cooder to sing my eulogy” and “let’s just see what tomorrow brings” being a couple examples, and the song Scared being especially appropriate. The song with which they closed the show, Ahead by a Century, is among their best known and has an airy, dreamlike feel to it. If you’ve never listened to it, you should.

I’m not sure how to wrap this up, except to say that I think we’ve seen the last performance of a truly remarkable individual, and that I am very sad it has had to end so abruptly. Although I’ve never met the man, we have common friends, and I know the pain this is causing his family and friends is far greater than the Canadian public’s loss of a great showman and artist. It sucks for all of us.