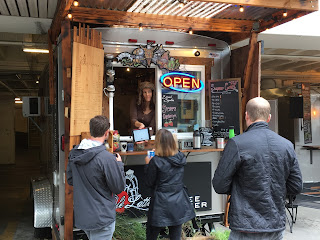 Portland and Seattle are the two most progressive large cities in North America. In the 1990s and early 2000's, Seattle routinely topped the lists of best places to live in the world; today, it's Portland. A key challenge both cities face is that they attract large numbers of migrants on an ongoing basis, primarily from other parts of the US. Portland, for example, currently adds 100,000 people every 15 years. This may sound modest compared to cities like Dhaka or Shanghai, but when you consider the fact that Portland’s population remained virtually unchanged between 1950 and 1980 at approximately 350,000 people, the subsequent addition of a quarter million more people is a big deal. In fact, it's a very big deal in terms of housing, transportation infrastructure, energy, water treatment, sewerage, schools, and all the other things that cities are expected to provide residents.


Municipal planners in both Portland and Seattle have worked hard in recent decades not simply to keep up with population growth, but to stay ahead of it and anticipate future needs. It’s a continuous struggle; affordable housing is persistently scarce, and despite massive investments in new public transportation infrastructure, Seattle traffic is bad and getting worse (Portland's OK so far). In addition to the speed of growth, each city has its geographical challenges; Seattle is hemmed in to the west and east by Puget Sound and Lake Washington respectively, while Portland straddles the Willamette River just upstream from its confluence with the Columbia River. Expanding outwards typically means building bridges or going uphill. Portland is the smaller of the two cities and has a better handle on urban sprawl than does Seattle, thanks to its more restrictive urban growth boundaries. So far, both cities have remained highly livable despite the rapid growth, and continue to invest heavily in strategic urban planning.

In late June, Portland hosted a day-long symposium on how to plan for climate change-related migration in coming decades. Organized by Portland State University and the University of Washington, the symposium brought together officials from city and county level governments responsible for the planning and provision of essential physical and social infrastructure in the Portland and Seattle metropolitan areas. I was invited to give a talk on the specific changes in migration flows likely to emerge in the next few decades, and to identify key things that planners in the two cities should be watching for (you can see a video of my talk by clicking here). In addition to my presentation and two others, there was a facilitated workshop in which participants brainstormed the types of information and priority-setting activities that would be needed to prepare now for the changes to come. The organizers plan to release fairly soon a detailed report on the workshop via the project website, and I do not wish to spoil their efforts by giving away in advance their key findings. But I do want to share a couple of my own thoughts, having had several weeks now to reflect back on the event.

So far as I know, this was the first event of its type in North America. The idea that climate can and does affect migration is not an especially new idea, but for policy- and decision-makers, it isn't something they've historically given much consideration to. Heck, sometimes it's an effort to get policy-makers to think that climate change will have any implications at all (the previous Canadian federal government particularly had its head up its keester in this regard). It was therefore very refreshing to speak to a group of people who already get it, who don’t need to be told that climate change will have implications for the quality of life in their cities in coming years, but who instead want specific guidance on how migration flows into their cities may change in coming years, and how they can account for it in their larger planning activities. This is an important development in planning for climate migration, hence the title of this blog posting. My hope is that this forward-looking exercise will inspire municipal governments elsewhere to start thinking similarly.

It was a challenge for me to speak before this group, since it had been about 17 years since I last lived in the Pacific Northwest, and both cities had changed so much since then. While I try to keep up to date on the characteristics of global and regional migration flows, I was not current with the demographic characteristics of recent migration into Portland and Seattle. Fortunately, there are plenty of data sources, so I was able to give myself a crash course. Since Portland was a host city, I decided to focus my presentation on future migration into Portland and future considerations for decision-makers in Portland, with the idea that the general principles would apply equally well to the city of Seattle.

Portland and Seattle receive migrants from virtually every state in the United States, but disproportionately from rural counties in the Pacific Northwest and from coastal California and from Arizona. You can see this in the map below, which shows the source counties of people who moved to Portland for the period 2009-2013. Another important consideration is that migrants to Portland are disproportionately young adults in their 20s and 30s, and a large percentage of them have a postsecondary education. As a result, the population profile of Portland is unlike that of many other large cities, as you can see in the second chart below. People beyond the age of retirement (i.e. older than 65) make up a tiny fraction of the overall population of the city. The number of school-age children is also unusually low, although the number of kids below the age of 10 is starting to tick upwards. In short, it's a city dominated by young working adults. 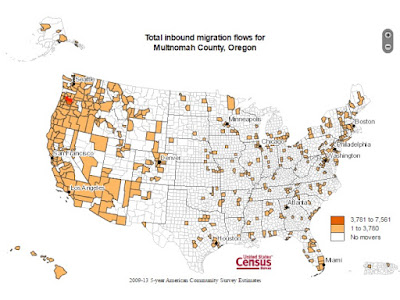 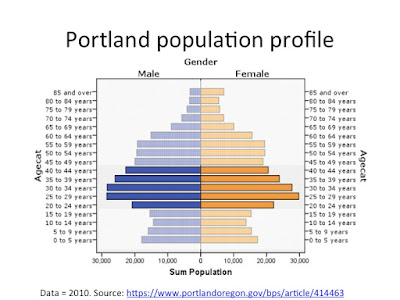 Young working adults have different needs and expectations for urban services and infrastructure as compared with other social groups. They are more likely to want to live in the urban centre than out in the burbs, and want good public transportation in and around the downtown core.  They’re more likely to patronize brewpubs and used bookstores than shopping malls and Costcos. It's no accident Portland and Seattle are routinely listed as the hippest cities in the US, or among the best cities for food trucks. It's therefore not surprising that Portland’s urban planners have been prioritizing in-fill construction, walkability, and bicycle commuting, or that the city has constructed one of the most impressive street-level light rail systems anywhere in North America. 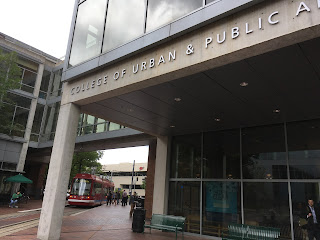 In Portland, the street rail runs to the front door of the PSU College of Urban Affairs. Coincidence? Probably not.

Important infrastructure investments take decades to plan, prepare, and execute. If there are significant changes coming 20 or 30 years over the horizon, planners need to start accounting for them right now. So for urban planners in Portland, two important considerations are (1) will the city continue to experience large amounts of in-migration, and (2) will future in-migrants will have the same demographic characteristics, and consequently the same needs and demands, as those who currently arrive today. If things continue much as they do now, Portland planners already have a very good idea of what their future needs will be and know what they should be doing next. It’s the unexpected or unforeseen changes that worry them. Hence their interest in how climate change will impact migration flows.

In my talk and subsequent contributions to the symposium I wanted to discourage participants from paying attention to alarmist scenarios found in the popular media of hundreds of millions of environmental refugees worldwide; if things get that bad in the next two or three decades, no amount of municipal planning now is going to be sufficient, so why worry about it? Instead, I encouraged participants to focus on how climate change is likely to affect places that are already key sources of current migration to Portland.

This is because the research shows very clearly that environmental migration is path dependent; that is, when people migrate for environmentally related reasons, they tend to go to places where they have pre-existing social connections. So, looking at the phenomenon in reverse, if you are going to receive environmental migrants from elsewhere, they will most likely come from places from which you already receive large numbers of migrants. For Portland, that means California, Arizona, Washington state and rural Oregon. How vulnerable are people living in those migrant source areas to the most imminent impacts of climate change? Consider California, for example, where water resources are generally scarce, and the state has been mired in a significant drought the last few years. Droughts affect not only the state's agricultural economy, but put pressure on urban water supplies, and elevate the risk of wildfires that frequently burn their way down into the state’s ever-sprawling suburbs.  Is California likely to become drier in coming decades? Probably. More water-scarce? Almost certainly. How will these climatic changes affect the migration decisions of Californians? They probably won’t trigger a mass exodus out of California or Arizona anytime soon, but there’s a good chance the direct effects of climate change and their indirect economic impacts will interact with social and economic drivers of migration and, over the course of time, generate an incremental rise in the number of people who migrate. And some of those extra migrants may well end up in Portland. It’s also worth keeping in mind that the types of Californians most likely to experience hardship because of climate change do not necessarily share the same characteristics as people who dominate current migration flows to Portland.

My three takeaway points for Portland’s urban planners were that they should continue monitoring the demographic characteristics of people who flow into the city in general; monitor particularly closely climate trends and impacts in those key migrant source locations; and build as much flexibility as possible into planning processes and procedures, so as to minimize the risks of creating infrastructure that isn’t aligned with future demographic characteristics. I suspect most municipal governments already understand this last point, and could probably figure out the first two on their own if they put their minds to it. They’re no-regret, low-cost recommendations that any municipality could take up. The final report from the symposium will no doubt contain many other, better recommendations for municipal planners, and I encourage anyone who’s interested to watch for the report on the workshop website.