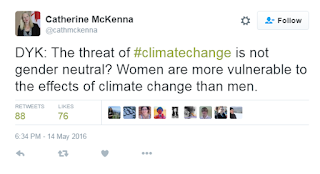 This week Canada’s Environment Minister Catherine McKenna and Conservative Party MP Michelle Rempel are being criticized for McKenna’s recent tweet that women are generally more vulnerable to the impacts of climate change than are men (Rempel agreed with McKenna). Although McKenna's statement is consistent with the scientific literature on climate change vulnerability, it has spawned not only the usual drivel from online twits and trolls (examples below), but also a badly researched article in the Globe and Mail questioning the accuracy of her statement.

As someone who has studied and researched community level vulnerability to climate change for many years, with a particular emphasis on adaptation and mobility, a statement like Minister McKenna’s is as self-evident as saying the sun will come up tomorrow. However, I recognize that not everybody is familiar with the climate change impacts literature, so this presents a good teaching moment. Consider what now follows to be climate vulnerability 101. If you want the long version, read volume II of the latest IPCC report, especially chapter 12 (the human security chapter).

“Vulnerability to climate change” essentially means the potential to experience loss or harm as a result of changing environmental conditions attributable to climate change. Scientists describe vulnerability as being a function of three key factors: exposure, sensitivity, and adaptive capacity.
“Exposure” refers to the nature of the environmental impact someone is likely to experience. So for example, climate change is likely to exacerbate or is already exacerbating the frequency of droughts in many dryland regions, increased snow melt in mountainous regions, thawing permafrost, increased frequency of high intensity tropical cyclones, die off of coral reefs, and an increase in mean sea levels. Obviously, the stronger the impact, or the closer you happen to be situated to that impact, the greater your vulnerability. The Swiss aren’t exposed to sea level changes, but they are exposed to changing alpine snow pack conditions. The opposite goes for residents of Miami.

“Sensitivity” refers to the characteristics of a particular community or household that may increase its likelihood of experiencing harm given its particular exposure. So, for example, millions of people live in Florida, where exposure to hurricanes is a fact of life that all must face. However, Floridians who live in trailer homes are more at risk of losing their lives in hurricanes than people who live in solidly built brick homes. Similarly, farmers are inherently more sensitive to losing their incomes due to droughts than are people who live in the country but work wage labour jobs in the city. As with exposure, differences in sensitivity are pretty obvious to spot once you know what you’re looking for.

“Adaptive capacity” refers to the ability to cope with or adjust to the effects of climate change. Adaptation can be proactive or reactive. If you live in a flood-prone area, raising your house on stilts or pilings, and not storing any valuable objects in the basement are simple, proactive adaptations you can implement to make your family less vulnerable. So is buying flood insurance. Sometimes, people need to actually experience a flood before they realize the importance of such strategies, and so they adopt them after the fact. Adaptation can be undertaken by only by individuals or households, but by governments and institutions as well. For example, local government may implement zoning regulations to prevent people from building homes in flood prone locations in the first place.

Of course, not all people in all places have access to the same adaptation options. Here in Canada, we have all sorts of regulations, insurance regimes, watershed management plans, building codes, and early warning systems to protect people and property from flooding. These adaptations can always be improved upon (as Calgary learned a few years ago), but in the world’s poorer countries neither governments nor most households have the necessary resources to implement the flood adaptation strategies we employ in Canada. In a place like Ouagadougou, for instance, many people don't own private property, and there are many self-built settlements in low-lying areas that are inherently flood prone. When the settlements are washed out by floods, people have no insurance, people have nowhere to go, and so they end of rebuilding in exactly the same place. Much as the government of Burkina Faso might like to get those people into proper homes in higher and dryer locations, it simply does not have the money to do so. So, people remain trapped and vulnerable.

Okay, so now that we have the basics of vulnerability explained, let's return to the question of whether women generally more vulnerable to the impacts of climate change than men. We can start with the assumption, that since in most instances men and women are found in equal numbers in the same locations, their exposure to the impacts of climate change is going to be equal. The question therefore becomes whether sensitivity and adaptive capacity are also always equal, or whether women experience the impacts of climate change differently from men. A statistically well-documented reality is that in most countries, in comparison with men women earn less income, are more likely to stay home to care for children and/or dependent elders, have less freedom to move about where they like (i.e. are less mobile), are less likely to have access to education, and, in many societies, women are actively discriminated against and their rights suppressed by their governments, their formal cultural institutions, and by the men in their lives. Even in liberal minded countries like Canada where laws are supposed to prevent such things, they still hold true for many women.

Also well documented by researchers is that mobility, access to social networks, access to information, access to money, and access to formal institutions are fundamental ingredients in reducing people's sensitivity to the impacts of climate change and to expanding their adaptation possibilities. Since women on average have less access to these ingredients for reducing sensitivity and building adaptive capacity, women are on average more likely than men to be vulnerable to climate change impacts in any given society, locale, or household. It's simple math.

To summarize, social inequality is the biggest driver of vulnerability to climate change, and women experience the greatest social inequality in most societies. Let me conclude with an observation from a recent study  that was recently published in a book I edited called "Environmental migration and social inequality". Writing about Bangladesh, Vanderbilt University professor Brooke Ackerly observed that there we are so often used to seeing the manifestations of social inequality that vulnerability is often “hiding in plain sight” but we choose not to see it. The reaction to minister McKenna’s comments shows that Ackerly’s observation holds true not just in Bangladesh, but in Canada as well. 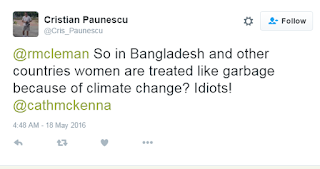 Ah, the rubbish we have to put up with on social media...