At 23 I joined Canada’s diplomatic service, and spent most of the next dozen years living and working at embassies and consulates abroad. Foreign service officers are dime-a-dozen in Ottawa and Washington DC, but people in most other parts of North America are unlikely to meet one. It’s one of those jobs that you know exists, but how you would get that job and what the job actually entails is a bit of a mystery to most people. 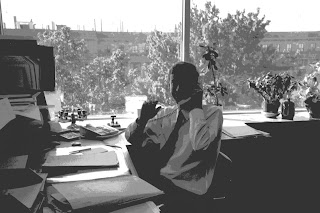 My former career often sparks curiosity when people find it out for the first time (usually from reading my biography online or from what others have said about me, I rarely mention it to new acquaintances unless there’s a reason for doing so). I’ve been asked many times, “So I hear you were a diplomat. What was that like?” Which is not an easy question to answer in a sentence or two. After all, could anyone sum up a dozen years of life experience in a sentence or two? So I usually reply with something along the lines of, “It was a great gig, lots of travel”, and I might list the places where I served (in order, Belgrade, New Delhi, Hong Kong, Seattle, and Vienna). I’m then often asked which city was my favourite (answer = I loved them all for different reasons), followed by the kicker, “So why’d you quit?” The answer to which is quite simple: by my mid-thirties I’d reached a decision point – was I going to be a lifer in the foreign service, or was I going to go get that PhD I’d always wanted?

Obviously I chose the academic path, and have not regretted leaving the foreign service. Sure I miss the excitement of living in a foreign city, where the simple act of walking down the street becomes an act of exploration. I miss the friends I made, both fellow foreign service officers and people I met along the way. I’ve never been closer to anybody else, apart from immediate family. Whenever we see one another, even after intervals of many years, we quickly fall into an old and happy familiarity. I don’t miss the day-to-day work. I know most people think diplomats spend a lot of time at cocktail parties, receptions, and dinner parties – and it’s true, I attended a great many of these – the nine-to-five work in an embassy or consulate is a lot like the work being done every day in government offices back home in Canada. So even though life in Waterloo is not as glamorous or intoxicating as Hong Kong or Vienna, and even though my most recent trips to London and Paris have been to the ones in southwestern Ontario, my new gig as a geography professor has a lot going for it, too.

Interactions with students are among the best aspects of being a professor, and I regularly get questions from students who want to pursue their own careers overseas. I’m always happy to help. I never had any guidance when I was their age. It was by chance that I came across a poster in the UWO student centre advertising an information session the following day for students interested in writing the foreign service exam. I attended on a whim, not knowing what the foreign service was, much less that there was an exam for it. I still wonder what my life would have been like had I not spotted that poster.

I recently re-read the great Austrian writer Stefan Zweig’s memoir, in which he encourages everyone to write an autobiography, even if it will only ever be read by friends and family. I don’t plan to go so far as to write an autobiography, but I’m now long enough removed from my old life in the foreign service, and I still receive enough curious questions about it, that I’ve decided to create a blog with some reflections on that period in my life. It will not be a thorough account and, apart from the first few postings, it won’t be chronological either. I’ll answer the questions I’m most frequently asked and offer a few descriptions of interesting places or events that happened along the way, in whatever order they happen to occur to me (hopefully the more interesting ones will occur first).

If you’re looking for insider accounts of important moments in world history between 1990-2002 (of which there were many), don’t look for them in my blog. I was a working-level foreign service officer who rose only as far as a First Secretary before leaving to do a PhD. Had I stuck around another fifteen or twenty years, I might have made it to becoming a consul general or an ambassador at a small embassy (the big ones go to political appointees); but then again, maybe I wouldn’t have. Expecting me to provide insights about the preparations to hand Hong Kong over from the UK to China or about how the Kosovo conflict was brought to a halt would be like asking the foreman on the shop floor at a GM plant how the company came to need a government bailout eight years ago; I was there at the time, but I wasn’t anywhere near the people making decisions. That said, I will offer some reflections on life in Hong Kong in the last days of British rule and my recollections of entering NATO-occupied Kosovo, among other things. The sorts of stories any career foreign service might tell if they can be persuaded to reminisce.

I’ve called the blog “A Garden Variety Diplomat” in recognition of my unremarkable legacy as a foreign service officer, and you can find it by clicking here. There’s a few postings already up there; for the time being I’ll leave them all on the splash page until I’ve enough to warrant a better design. If you find it at all interesting, please leave a comment. If nothing else, it might help put you to sleep on a night when you’re not feeling especially drowsy.

Posted by Robert McLeman at 2:09 PM