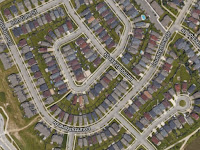 
Last night after ten, an 80-year old man turned up on my doorstep, lost and scared. His car was idling in my driveway. He had been at a hockey game in Kitchener, the next city over from Waterloo, and was on his way home. He was able to find his way back to northwest Waterloo ok, but once he left the main road, he had become disoriented in the suburban labyrinth of beige snouthouses and anonymous-named streets. The night was dark and stormy, as it is in all scary stories, the leaves were being whipped off the trees, and he had driven in circles, becoming increasingly panicked. In desperation, he rang my doorbell.

I asked him his home address, which he knew, and I recognized the street name belonged to our neighbourhood, though I didn’t know where it was precisely. I tried to give him verbal directions to the key intersection in our part of town, thinking that if he could get back to that location, he could reorient himself, but he was too upset. So I put on my coat and shoes, grabbed my phone, and hopped into his car and navigated him home, which turned out to be 800m away. He did not recognize any of the streets we drove along to get there. Once we got into his driveway and found that the automatic garage door opener in his car worked, he stopped panicking, and recognized he was home. He said he had lived there over 30 years. At this point, he was anxious to get me to leave, saying that if his wife saw he needed a stranger’s help to get home, she wouldn’t let him go out at night again on his home.

I wished him a good night and walked home. I had had many negative thoughts about suburban subdivisions – they’re visually unappealing, are typically built over good farmland, are the least energy efficient form of housing there is, etc, etc – but I had never previously thought of them as being sinister. When I experience the suburbs, I do so from the perspective of a healthy adult male with no physical disabilities, with access to the latest technology (“Siri, find street X for me”), and an advanced geographical education that helps me interpret the urban landscape as I go (without bragging, I once found my way on foot from a suburban dinner party to my downtown hotel in a strange city at night, without a map, simply by following drainage patterns). I have not yet had to approach the suburban landscape from the perspective of an older, more vulnerable person whose short-term memory is starting to erode. Nor, for that matter, have I done so from the perspective of someone with a disability, or of a child, or someone dependent on infrequent public transportation. Even a slight visual impairment could turn what is from my current perspective a non-descript landscape into something more worrisome, especially at night.

As is typical of suburbs built in the 1980s, my part of Waterloo consists mostly of beige, half-brick, half-aluminum siding, detached houses with a prominent driveway and garage in the front yard. The houses are all designed off one of a half-dozen basic plans. Most have a single tree in the front yard, one of four species (ash, linden, Norway Maple or blue spruce), all the same height because they were planted at the same time. Unlike the grid pattern of city streets, my neighbourhood has curving, staggered streets and looping courts of uneven lengths that are umbilically connected to a nearby boulevard. It prevents speeding and cut-through traffic, but there’s nothing intuitive about the layout. The streets all have anonymous, meaningless names like Ashwood and Stonegate, and the entire area is zoned residential, meaning there are no landmarks from which to navigate, and no corner stores or gas stations to pop into on a dark night to ask for directions. And as a consequence, there are no people in public either, once the dog-walkers have gone to bed. As I walked home from the old fellow’s house last night, I did not pass another person. So if you find yourself in distress and you’re without a phone, you take your chance and knock on a stranger’s door.

Unfortunately, here in Waterloo Region, and across southern Ontario more generally, there’s a headlong rush to build ever more of these beige wastelands that shows no signs of ebbing. The subdivision homebuilders seem to run Ontario, the politicians unable and unwilling to put any check on them, probably beholden to them. They replace our country’s best farmland with soulless, greenhouse-gas-spewing, low quality/high-priced shelter. There are many good reasons to despise the suburbs,* and last night helped me recognize another. Ontario’s population is rapidly aging, and as we become older, less mobile, and less independent, these suburban neighbourhoods we once found to be benign will become more disorienting and, in some instances, sinister, as that poor fellow learned last night. Is that really the type of habitat we should be creating for ourselves?

In case you’re wondering what happened afterwards, when I got home I put in a phone call to the desk officer at my local police station, explained what happened, and suggested they send someone out the next day to check up on the man and discuss with him how he can’t be out driving at night alone anymore.  The police get these sorts of calls regularly, and the officer remarked, “We all get there one day, don’t we?”

*In case you’re wondering why I live in one, the answer is simple; here in Waterloo, the housing stock is mostly subdivision homes, the alternatives are limited. When I first moved here from Ottawa, there weren't any halfway decent homes for sale in the small, older part of town. But rest assured, if I reach 80, I won’t be living in one.

Posted by Robert McLeman at 6:35 AM