On puck luck and leadership 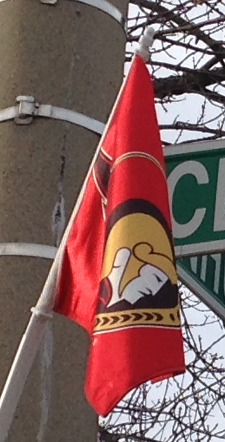 Time to take down the Sens flag until next-year's playoffs.

For those who did not watch the game, or who do not watch hockey at all, here was the situation. The Senators were hosting their arch rivals the Montréal Canadiens in the first round of the NHL playoffs. It was game six of a best-of-seven series. Montréal was leading the series three games to two, meaning that if Ottawa lost they would be eliminated. Ottawa has had a remarkable season this year by any standard. In December, the team was mired near the bottom of the league standings, and replaced their previous coach with Dave Cameron. For the first few weeks, not much changed, but then in late January the team went on a remarkable run, winning nearly all of its remaining regular-season games, and making it into the playoffs. The Senators promptly lost the first three games of the series to Montréal, even though the Sens played them very close. Then the Senators won the next two games, outplaying the Canadiens in the process. That was the setting for last night's game.

In the first period of the game, Montréal got a lucky goal on the basis of an impressive display of hand eye coordination by forward Brendan Gallagher. But for much of the game, Montréal was back on its heels and relying heavily on its amazing goaltender Carey Price. By the end of the game, the Senators had outshot the Canadiens by more than two to one. In the middle of the second period, the Senators believed they had scored the tying goal. Forward Jean-Gabriel Pageau had raced down the left wing, took a shot on goal that rebounded off Price, and which Pageau then knocked into the net as he was being tackled by the defenseman. Unfortunately for the Senators, the referee was on the other side of the rink, having stopped in a position from which he had poor sightlines to the play. Referees are trained to blow the whistle to stop play whenever they lose sight of the puck. After Pageau’s initial shot, the referee could no longer see the puck and so he whistled the play dead. Once the whistle blows, it does not matter if the puck goes in the net or not. The referee knew he had made a mistake, because as he skated around behind the net and saw that the puck was inside it, the referee actually hung his head. In an elimination game where it was clear the outcome would be decided by a single goal, this was a frustrating error that could not be overturned.

This is where Coach Cameron first demonstrated impressive class and leadership. Countless other coaches would have gone ballistic, screaming and hollering, and doing their best to berate and embarrass the official who made the mistake. Not Cameron. He got the explanation from the officials, nodded, and let the game move on. You can see the whole sequence, from disallowed goal to Cameron's reaction here. The Sens would not get another goal, though they came close many times, and consequently their season ended last night.

I don't usually watch post-game press conferences for sports, but by chance I happened to see Coach Cameron’s. When he came to the podium, Cameron started by praising his players for their hard work, and stating how proud he was to be their coach. The inevitable first question he got from the media was about the disallowed goal. Everybody in the room knew that if the referee had not made that mistake, there is a very good chance the game, and possibly the series, might have had a different outcome. This is where Cameron showed his class a second time. He simply said something to the effect that, in the game hockey there's a lot of luck involved (he actually used the term “puck luck”) and that the referee simply didn’t have good “puck luck” on that play. He didn't blame the referee for his team's defeat. Cameron instead spoke at much greater length about a Sens assistant coach who passed away during the season, how much that had affected his team and himself, with the very obvious implication that the loss of that coach was a far more significant loss than last night's hockey game.

Coach Cameron reminded us that in life as in hockey, nothing can ever be taken for granted, that there is good luck and bad luck, and that there is no point getting angry when luck does not break your way. You get on with it, and keep your focus on what’s important. That's a message we all know already, but it never hurts to be reminded once in a while.
Posted by Robert McLeman at 4:57 AM