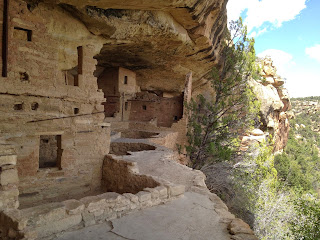 The ancient Pueblans of the Four Corners region have fascinated many people for a long time, me included. You may have seen pictures or heard stories of the Anasazi, the cliff dwellers of the southwest. In the late 1100s CE they began building elaborate apartment complexes in alcoves beneath overhanging sandstone, only to abandon them around the year 1300 CE, never to return. Yesterday I finally got to visit one of their larger settlement sites, Mesa Verde in southwestern Colorado.

The cliff dwellings are nothing short of amazing. Not all are open to the public; to access the ones that are, the US National Park Service has constructed paved trails and installed metal handrails. Back when the dwellings were occupied, you would have needed to be sure-footed as a mountain goat to get to them, scrambling down narrow steps chiseled into the cliff faces, and squeezing through narrow cracks. Once inside, they are breath-taking. Open to the elements on one side, the small rooms built of sandstone bricks and juniper wood are set behind large balconies. Into the balconies have been hollowed out large kivas – multi-purpose chambers used for communal gathering, food preparation, handicrafts, and worship. Natural springs are found in the back recesses of the alcoves.

Three important questions are, (1) who were these people, (2) why did they start building cliff dwellings, and (3) why did they abandon them?* The first question has been answer reasonably well. They were part of the larger population of Pueblan peoples who occupied a vast region of the US southwest, and who still live there today. The word ‘pueblo’ means ‘town’ in Spanish, and is a fitting description for the preferred type of habitation of that people, who live in large apartment-style towns at the time of Spanish arrival. The name ‘Anasazi’ is not a name the Pueblans chose for themselves, but a Navajo word referring to the ‘ancient ones’ (I have also heard it translated as ‘ancient enemies’). The Navajo are a different people, who migrated to the southwest after the Pueblans were long established in the region.

Why did some Pueblans take to living on cliffs? In the Mesa Verde area, the Pueblans had traditionally lived on the tops of mesas in excavated ‘pit’ homes, hunted game, and grew corn, beans, and squash. They domesticated wild turkeys, and grew and weaved cotton. There is a theory that their economy was very successful, and that the populations grew rather large, to the point where population growth started to exceed their ability to grow the food supply. This led to greater competition between clans for resources, which in turn led to conflict, which in turn led people to build dwellings in cliff-side locations that were more easily defensible than exposed pit homes on the mesa tops. But because they didn’t leave written records, it is difficult to say. They may simply have realized that the cliff-side apartments were more comfortable: indoor running water, cool in summer, and easier to heat in winter (important in an area where wood can be scarce). That is certainly what struck me when visiting them: these cliffside apartments seemed exceptionally well designed for the local environmental conditions.

Why did they abandon these dwellings in the late 1300s? Here again there are a few theories. Conflict and competition for food is one explanation. The areas around Mesa Verde had been deforested, and large game had disappeared. Loss of forests typically has an impact on local hydrological processes as well. The abandonment of the cliff dwellings also coincides with an extended period of drought that struck the southwest. If the natural springs inside the cliff dwellings were to have dried up - and this seems very likely, given the local geology - their inaccessible locations would have been a liability. The Pueblans did not have any means of irrigating their crops, so their basic foodstuffs would have become scarce. For these reasons, it is believed their residents migrated out of the mesas to resettle in river valley locations elsewhere in the region.

Perhaps they intended to come back one day to their cliff dwellings. It is believed that many Pueblan groups practiced a style of swidden agriculture, whereby they would farm an area until it became less productive and forests became depleted, then move on to new locations or return to older settlement locations once the soil and vegetation had regenerated. If that was the intent of the cliff-dwelling Pueblos, unforeseeable events prevented them from ever doing so – namely, the arrival of the Spanish conquistadores and the destruction and upheaval that accompanied them.

A few years ago I did a study on the reasons for modern settlement abandonment, which included case studies from Iraq, Montserrat, Detroit, and the Aral Sea region. The ‘Anasazi’ came up several times during my literature review for that study. Their story figured into my study in only a small way, but ever since it has been my intention to go see their cliff dwellings for myself. I’m glad I finally did.

*I am indebted to US Park Service ranger Paul Ferrell for his insights on the answers to these questions. To read more about the reasons behind the abandonment of the cliff dwellings, I suggest: Benson,L. et al (2007). Anasazi (Pre-Columbian Native-American) Migrations During The Middle-12th and Late-13th Centuries – Were they Drought Induced? Climatic Change, 83(1-2), 187–213.

Posted by Robert McLeman at 4:27 AM