On maps as political statements

When a country makes an official map of its territories, it isn’t just a map – it’s a political statement. Nations claim particular spaces as their own with maps; whether other nations respect those claims is another matter. So it is that the same set of islands in the South Atlantic Ocean appear as the Falkland Islands on British maps and as the Islas Malvinas on Argentine maps (even the Wikipedia entries differ in English and Spanish, if you follow the preceding html links). In practical terms, Britain governs those islands and has done so since the 1830s, except for a period in the 1970s when Britain and Argentina went to war over them. But just the same, each country’s maps tell the world a different tale.

Generations of official maps produced by the government of Canada have made territorial claims that haven’t always been recognized by other nations. For example, for decades now Canada’s official cartographers have extended the Alaska-Yukon boundary in a dashed straight line to the North Pole, and then brought it back down the 60th meridian until it reaches the Lincoln Sea; from there a line is drawn through the ocean equidistant between Greenland and Ellesmere and Baffin Islands (Fig. 1). The islands, sea ice, and ocean contained inside this roughly triangular area is represented by our government as being within Canadian territorial boundaries. Other countries have not always recognized the legitimacy of this claim.

Fig. 1: Dashed lines across the Arctic 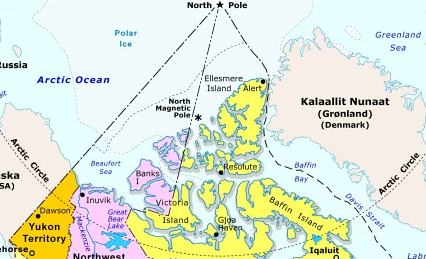 For example, in 1985 a US Coast Guard icebreaker sailed across that region without first asking permission as would normally be done when entering another nation’s territorial waters. After much squawking by the Canadian government, Canada and the US eventually made nice with a 1988 bilateral agreement that the US would in future ask permission before sailing through the region - but it did not officially recognize the Canadian territorial claim in the Arctic. Also beginning in the 1980s, Canada and Denmark began disputing the sovereignty of Hans Island, an uninhabited speck of land in the channel between Greenland and Ellesmere Island. Before then, neither country had given much thought to Hans Island until a Canadian company began exploring for oil around it. (These and other territorial disputes between Canada and its Arctic neighhbours will hopefully be resolved through the United Nations Commission on the Limits of the Continental Shelf.)

Which brings me back to my point that the making of an official map is an inherently political statement. Canada draws these lines across the Arctic on its official maps precisely because it wants to convey to Canadians and to the world at large that it claims that particular space on the planet and intends to enforce jurisdiction over it. You will find Hans Island explicitly labeled on official maps of Canada since the 1980s (Fig. 2), even though dozens of much larger Arctic islands go unlabelled. Do not think this is coincidental. It’s a political statement, made via a map. 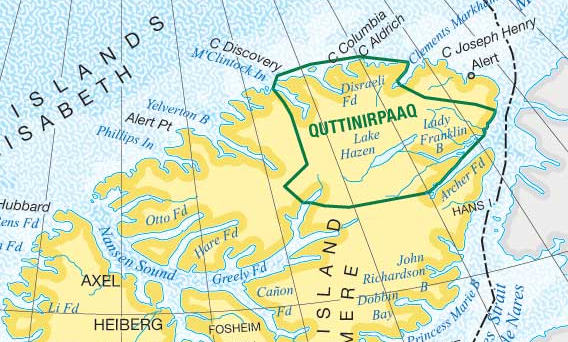 Now on to a story that appeared in the media this week. The government of Canada has released a new official map to replace the last one, which was published in 2006. Some sharp-eyed observers noticed something peculiar about how the Arctic Ocean is portrayed on the new map. Both the 2006 and 2015 maps have a representation of the permanent sea ice in the Arctic Ocean, but curiously, the spatial extent of sea ice is much larger on the 2015 map than on the 2006 (you can compare them here). Is this an error? It is true that the spatial extent of Arctic sea ice fluctuates from one year to the next, so it is reasonable to assume that the sea ice boundary lines would differ between the two maps. The problem is that Arctic sea ice is declining, not growing. Why does the new map show the opposite?

It seems that Natural Resources Canada – the Canadian government department responsible for producing the official map – has changed its definition of what constitutes permanent Arctic sea ice for official maps. The 2006 map simply represented the extent of permanent Arctic sea ice as it actually was at the time the map was produced. The 2015 map uses a thirty year average of the spatial extent of sea ice as measured in the month of September, from 1981-2010 (Fig. 3, Fig. 4 below). Sea ice shrank over that thirty-year period, so the measure selected for the map shows a spatial area much larger than would be encountered today. And, since 2006 falls near the end of the selected thirty-year period, it would indeed show a smaller spatial extent than appears on the current map. In technical terms, the current map is correct, as was the 2006 map.

But this new map is supposed to be current. Why would anyone choose to represent outdated historical data on a supposedly current map? Why draw sea ice where one is currently unlikely to encounter any? More precisely, why would Natural Resources Canada change its interpretation of Arctic sea ice extent from one version of a map to the next without explanation, without any technical reason to do so, and thereby create a less reliable representation of current reality? How very bizarre. After all, one of the reasons for updating a map in the first place is to update the data it depicts - not backdate it.

Now, I recognize that the official map of Canada is not a navigational chart. No mariner will ever be in danger of drowning at sea because sea ice is not typically found where this map claims it would be. But that's my point: the purpose of an official map is deliberately and inherently political, not navigational. Given that the 2006 map’s representation of sea ice was already technically accurate and therefore required no methodological correction, the question becomes, for what political reason has the official map changed? In the absence of any credible explanation from the Minister of Natural Resources for the switch (and I haven't seen one yet*), I will assume it is what it is: a picture of Canada the government would like to have the world believe, and not necessarily what actually exists.

Fig. 3: Data used in 2015 map makes sea ice extent appear greater than it has been in past decade 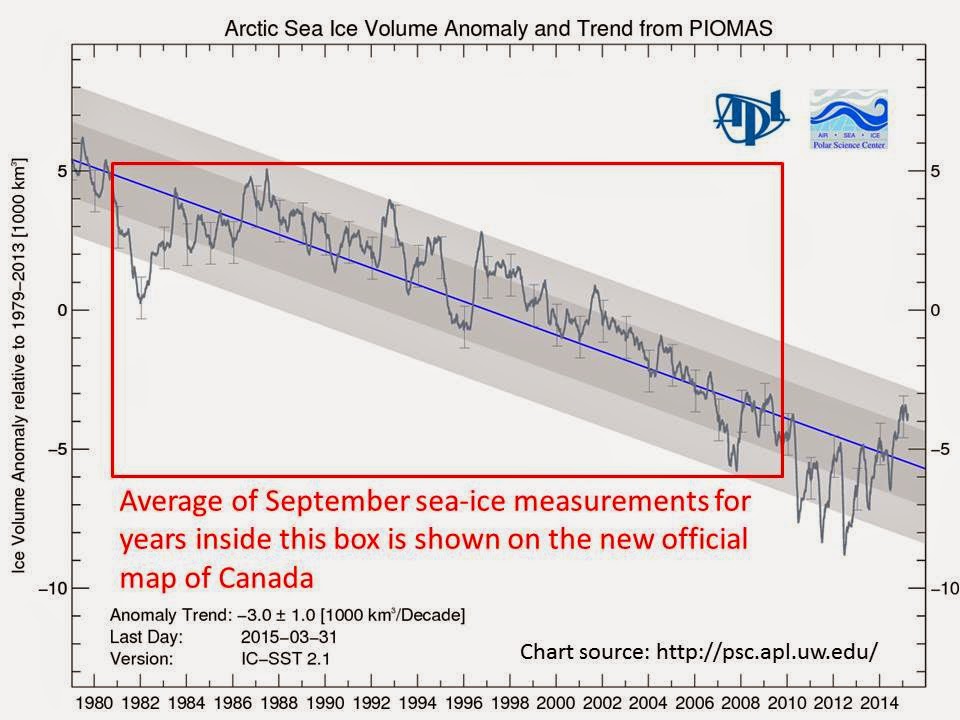 *Update: A Canadian Ice Service spokesperson is quoted in this article as say that showing permanent sea ice as in the 2006 map is a poor choice, since it represents a "minimum of minimums", and the new method allows for more valid comparisons over time. This makes no sense unless the government is planning on making annual updates to the official map using a moving 30-year average. And, if that is the plan why start with a 30-year average that ends in 2010 for a 2015 map?It seems to me that if you're not making frequent updates to a map, you display permanent features (i.e. permanent ice cover), not ephemeral ones.

Posted by Robert McLeman at 1:25 PM