Nature as measure 2: polyculture as a better food system

On the outskirts of Yuma, Colorado, there’s a massive cattle feedlot, where tens of thousands of young cattle are brought each year to be fattened for slaughter. The feedlot is bigger than the town itself. The camera on my smartphone is not able to do the scale of the operation justice, so I’ve included a Google Earth screengrab instead. There is nothing especially remarkable about this particular feedlot; there are several others like it in Colorado, and many more across the North American west, some larger, some smaller. It was until recently owned by a Brazilian company that had to sell up due to some bribery scandal back home; it is now owned by an anonymous New York-based holding company. So far as I can tell there have been no significant complaints about its operations. I wouldn’t like to live downwind from it, but then again, not many people do; the feedlot is east of town, and the wind comes mainly from the west.

Figure: Yuma, CO to the left; Five Rivers Feedlot to the right.
The circles are monoculture crops being irrigated with groundwater. 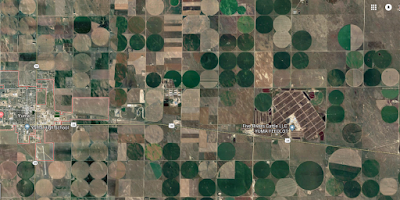 Feedlots are not natural. Cattle are grazing animals descended from wild aurochs, anatomically adapted through evolution to consume and digest large quantities of grass. They are not naturally grain eaters and, although they are herd animals, their wild ancestors would not ordinarily have remained in the same place for any length of time. Had they done so, they would have quickly starved to death from having denuded the local landscape of vegetation. They would especially not have concentrated in such large numbers in such a small space for such a long time, standing about in their own excrement, for disease would have run rampant among them. Cattle at feedlots are routinely medicated to stave off infections and diseases, including antibiotics that are also used to treat humans, making these drugs less effective over the long term.

Feedlots may not be natural, but they are what makes $5 value meals at fast food chains possible. Of course, cheap ground beef comes at a high environmental cost. Huge acreages of productive farmland are given over to growing corn and soybeans for animal feed, and huge quantities of fossil fuels are used to harvest and transport that grain to feedlots, to which the cattle themselves have been trucked from distances near and far. Feedlot cattle also belch much higher amounts of methane than grass-fed cattle, a fact brayed and honked about by donkey-like politicians who seek to divert discussion of the larger environmental impacts of industrialized agriculture by mocking research on ‘cattle farts’.

Some environmentalists argue that the solution is to abandon the raising of livestock altogether, and for all of us to become vegan. Reducing our meat consumption and increasing our vegetable consumption makes good sense in terms of our own health and for the land, but eliminating meat altogether from our diets is not necessary. Indeed, were we here in North America to get out of the industrial feedlot model of producing beef, we would free up a lot of land to produce food for direct human consumption. However, crop production is not without its environmental impacts, especially when done as monoculture, single-crop fields. Simply switching from fields of animal corn to fields of sweet corn would solve little; neither would sending fields of soybeans straight to the tofu factory. Monoculture also is not natural, requiring vast amounts of fossil fuels, artificial fertilizers and agri-chemicals to make happen.

The problem is not the food itself, but how we choose to produce that food. Before Europeans came to North America, there were giant herds of bison across the continent, flocks of birds that would take days to fly past, and almost unimaginably large schools of fish in lakes, rivers, and near-ocean areas. Soils were deep and hugely productive; forests heavily stocked with nut-producing trees. These enormous quantities of plants and animals were not distributed in uniformly shaped patches across the landscape the way crops and feedlots are today, one species isolated from the next; they were a web of interacting organisms that collectively, in self-sustaining fashion, produced enormous biological diversity and an enormous biological mass. The agricultural equivalent of ecological heterogeneity is polyculture – the practice of raising a variety of plant and animal species on a given farm in such a way that the productivity of the land as a whole is maximized.

Polyculture entails using local knowledge of the landscape to make ecologically sound choices of crops, food animals, and wild species that produce good volumes of food and good profits for the farm operator, while maintaining (and indeed enhancing) the health of the land and the people working on it. Polyculture, when practiced well, mimics nature. Land on the farm is a mix of cropping and grazing; animal wastes and green manures (plants like buckwheat, clover, and legumes) are main sources of fertilizer for the land. This is how nature self-sustains ecosystems. There are many examples of polyculture – Joel Salatin’s Polyface Farm in Virginia being one well-known example. I have visited numerous polyculture farms over the years, and never fail to be amazed at the sheer volume and variety of high quality foods that a knowledgeable polyculture farmer can produce on a modest parcel of land. The image of a family farm that many of us carry in our heads, one of a mix of cows and sheep and ducks and cornfields and hay bales all being tended over by a smiling family wearing overalls – that’s a polyculture farm. 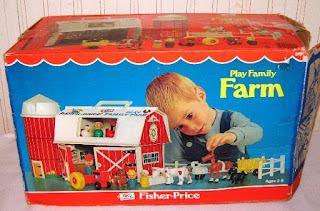 The reasons we got away from traditional polyculture farming practices have a lot to do with a collective desire to have cheap, convenient food, and to not have to concern ourselves with where or how it was produced. Industrial agriculture has been effective in this respect: the amount of money spent on food as a proportion of household income has dropped steadily since the 1950s, even as costs of housing and transportation remain relatively about the same (see the figure below). A key reason so many households can afford gaming consoles and smart phones, gas-guzzling minivans and bucket vacations in the Caribbean is that the income families once spent on food can now be allocated to these other things. This in and of itself is not evil; smartphones and vacations improve our lives greatly. I certainly enjoy mine. I also enjoy the occasional hamburger and BLT sandwich, and have no desire to give them up, either. I don’t think any of us needs to give up such things in order to have a more sustainable food system. We may have to give up drive-through windows selling chicken nuggets at $2.99 a dozen, which probably isn’t such a bad thing, since for health reasons we probably shouldn’t be eating that garbage anyhow. We may need to spend a little more time preparing our own meals from whole ingredients, rather than relying so heavily on ready-made meals and pizza joints to feed ourselves – but again, I’m not sure that’s a sacrifice, since a lot of self-proclaimed ‘busy’ people I meet seem to still find time for Netflix, social media and so forth.

In short, I suspect that it would not be especially disruptive to pivot toward a more sustainable food system, one that more closely resembles natural ecological systems, produces plenty of good quality food and allows for a better quality of life for the people who produce our food. We don’t all need to become tofu-munching vegans to make it happen, though I must confess I’m eating a lot more tofu these days and enjoying it. 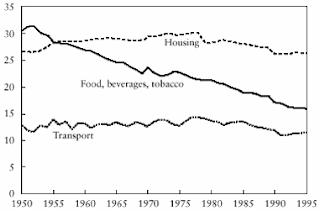 Posted by Robert McLeman at 7:50 AM