On the Great Plains 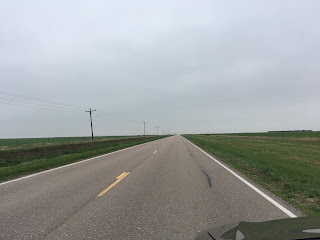 A road in southern Nebraska

I spent a week this month driving around parts of the central Great Plains: eastern Colorado, northern Kansas, and southern Nebraska. It’s an area few tourists bother with. I was accompanied by a grad student who is building a geospatial model of the Plains region from central Alberta to central Texas, filling it with decades of economic, environmental, land use and demographic data in the hopes of replicating current rural population patterns. Our hope is that, if we can reasonably represent the current situation, we can forecast future population patterns in the face of rapidly changing climate and economy. To an outsider, the picture of current rural population trends is one of steady decline, but the situation is much more complex. This was one of many trips I’ve made over the years to the Great Plains (which includes the region Canadian call ‘the Prairies’), but the first time I’d been to the Kansas-Nebraska border area. For those who may never get there, I thought I’d share a few reflections on what I saw and heard while I was out there.

First, some thoughts about the people. It’s a common stereotype, but one that mostly holds up: rural and small-town people on the Plains are approachable and polite. They won’t inquire about your business, but if you go up, introduce yourself and your purpose and ask if you might pose a few questions, they will be happy to chat. This wasn’t a formal interviewing trip on my part, but I made a point of telling people about our project and listened carefully to their ideas about it. They are for the most part genuinely pleased to hear someone take an interest in their communities’ future, since it is something that preoccupies many of them. Unlike cities such as Denver, Boulder, and Lincoln, the future prospects for growth and vitality are very uncertain across much of the Great Plains, and one small event – the closing of a factory, the opening of a meat packing plant, or the recent decision by China to impose a tariff on US sorghum exports (a tit-for-tat reaction to President Trump’s tariff on Chinese metal products) – can alter a community’s prosperity in an instant.

A different stereotype which does not hold up is that rural Plains people are narrow-minded, right-wing Trump fanatics. While it’s true that most states and counties on the plains skew Republican at the polling station, and there are certainly far more fundamental Christian churches, radio stations and pro-Life billboards than you’ll find in any other part of the US barring the deep south, Plains people are more politically thoughtful and pragmatic than they are portrayed. Huddled in the tornado shelter of a hotel in Concordia, Kansas (more about that in a moment), I had time to chat at length with the hotel staff. They don’t earn nearly the same income as me, and their jobs are much less secure. Their employer-provided health insurance provides modest coverage, and a trip to the doctor requires a co-payment from their own pockets.  Some drive 40 miles to work – decent jobs aren’t plentiful. They are very worried about the trajectory their country is on under President Trump, but they were just as worried under President Obama. The last time this region was truly prosperous and economically optimistic was back in the 1990s. Since then, the Plains economy has roller-coastered through ups and downs. Since the economic crisis of 2008, there have been great gains in urban economies in the US, but on the rural Great Plains, growth has been slower. The general perspective on President Trump of the people I spoke with is that they are dubious of his promises and disapproving of his conduct and values, but they nonetheless understand why he has been so popular in rural America: their families were struggling after two terms under Obama, and Trump spoke directly to this very point.

About that tornado shelter. If there’s one word that captures climatic conditions on the Plains, it’s ‘extreme’. Winters are extremely cold, summers can be extremely hot and dry, and extreme weather events happen regularly. April through October is tornado season on the Plains. It’s where warm, moist air circulating northward from the Gulf of Mexico meets cool, dry air flowing over the Rocky mountains. Massive supercells routinely form, delivering heavy rains, thunder, lightning and strong winds. We were driving north from Salina, Kansas toward York, Nebraska, late one afternoon when we found ourselves surrounded by a horseshoe of powerful supercells. Coming up over a rise north of Concordia, the sky was black to the north, west, and south, and the clouds were moving swiftly eastward. At that moment I knew how a fish must feel when it realizes it has swum into a closing net. We retreated to Concordia and checked into the Holiday Inn, the desk clerk telling us to not get too comfortable in our rooms, for the tornado sirens would likely soon sound. They did, and we hustled with other staff and guests to the safe area on the ground floor. I’ve experienced a category 10 typhoon in Hong Kong (i.e. a strong hurricane) and plenty of other extreme weather events, but I’ve never been quite as spooked as when that supercell passed over Concordia. You’ve heard people talk about a wall of water, the noise, and the extreme brightness of the storm from all the lightning – it’s entirely true. This particular supercell generated both funnel cones and wedge tornados, all of which fortunately missed Concordia, but struck a number of villages we’d passed through only hours before. One of the things we plan to do in our research project is to monitor what happens to the population of settlements after a tornado: do people rebuild, do they rebuild, or…? 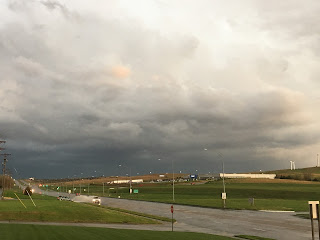 Had we started our trip 48 hours earlier we would have experienced a massive dust storm, of the type that plagued the Plains in the 1930s. The reason is easy to see: poor land management practices. Historically, farmers on the central Plains grew grain: wheat, oats, sorghum (which they call ‘milo’). Farmers learned important lessons from the 1930s droughts, and adapted their land management practices accordingly. Instead of routinely tilling up their fields each spring and exposing the fallow soil to the elements, they moved toward conservation tillage, the goal being to keep the soil covered in vegetation most of the year, and planted drought-tolerant varieties. That has all changed in recent years. Now, corn is being planted in all but the driest of areas, made possible by heavy investment in groundwater irrigation and pounding ammonia fertilizer into the ground. There are literally mountains of last year’s corn sitting on the ground at grain terminals across Kansas, awaiting shipment to ethanol, corn syrup, and corn oil processing plants. However, the land pays a high cost: after it’s harvested, corn stubble does a poor job holding the soil in place, especially if it’s been cut low, and leaves strips of bare soil that the wind picks up and carries off. In the short term, corn is more profitable per acre than wheat or milo, but it’s more like mining than farming. 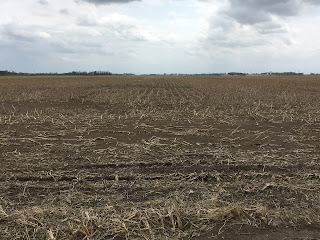 Farming is still the livelihood for many families, but its importance as a direct employer is waning. Farms are continuously getting bigger and more mechanized. One woman we chatted with said her family is merging their 3,000 acre farm with a neighbour’s of similar size and will have the neighbour’s son run it: none of the other children want to farm and, in any event, 3,000 acres is too small to remain viable in the future. It’s a similar story for livestock: if your cattle herd doesn’t number in the thousands, you’re running a subsistence operation, and likely working off the farm to make ends meet. One rancher we met opened a bar/restaurant in a small town three years ago, telling us he did so mainly so he and his friends would have a place to meet and have a beer (the town having no other restaurant options than a Subway and a Sonic drive-in). He’s since found the bar to be more profitable than his ranch. As a side note, the five-dollar burgers are made from his own cattle, and they’re delicious. Us city people willingly pay a whole lot more for locally-sourced food in our restaurants. 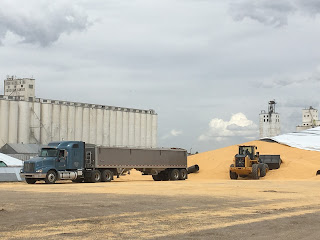 A mountain of corn at a grain terminal in Goodland, Kansas

The aforementioned rancher is unusual in that he keeps his cattle on the farm until they’re heavy enough to be processed locally. The increasingly common practice on the Plains is to raise cattle to a certain weight and then transfer them to large feedlot operation for fattening, and then shipping them to an industrial meatpacking plant. These are ungodly places. Larger feedlots, like the one we passed in Yuma, Colorado, might have ten thousand cattle confined in large pens, gorging on grain and dosed with antibiotics to prevent the infections that would otherwise run riot in such conditions. The meat packing plants bring in hundreds of foreign workers, documented and otherwise, to towns like Grand Island and Garden City to work in dangerous conditions for low pay, in facilities that stink like no stink you’ve ever smelled. Local schools must somehow find the resources to educate and provide free lunches for the influx of poor kids who speak no English. It isn’t easy.

Some towns and cities on the central Plains are thriving. Kearney, Nebraska, is a lively place with great coffee shops, a thriving cultural scene, and even a paddling park along the Platte River. The presence of a university campus helps bring people to the community, and some stay on after their degrees. Other towns seem to be treading water, their population neither growing nor declining. Their keys to population stability include the presence of large employers, such as a regional hospital or a penitentiary, a community college, and/or large manufacturing plants. And then there are many small towns that are in terminal decline. Their town squares feature primarily empty storefronts. The closure of a school or the loss of the full service grocer hastens the decline. If they’re lucky, a Dollar General shop will open up and provide access to basic dry goods and packaged foods; otherwise, residents will be in their cars continuously, driving to the nearest WalMart supercenter, which may be a couple counties away.

The next steps for our research project is to begin capturing all these different variables in datasets that can be combined in a geospatial model, and analyze how they interact with one another to produce particular population trends. We in particular want to zero in on the strength (or weakness) of the climate ‘signal’ in current population trends, so that we can begin looking forward to how changes in climatic conditions on the Plains will affect population patterns. However, we’re also keen to look at the future influences of non-climatic factors, including those mentioned above, as well as some I haven’t mentioned (from groundwater depletion to opioid problems). As we get results, we will post them on a dedicated project website. Stay tuned.

Posted by Robert McLeman at 7:40 AM