Dublin, a fair city being ruined by traffic 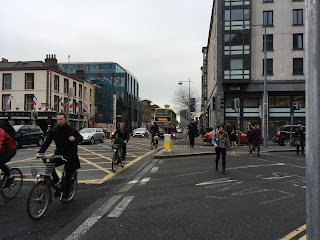 Before the rush hour...

Dublin has an automobile problem. Like many European capitals, it developed organically in the days when pedestrians and horse-drawn carts were the commonest forms of travel. The narrow, irregular streets of the old town are bifurcated by the River Liffey, with the sea to the east and hills to the west further shaping the directions of settlement growth. A small number of roads radiate out from the centre to today’s suburbs, which developed as separate towns and villages hundreds of years ago, each with its own distinctive, non-gridded street patterns. Onto this pre-existing honeycomb of transportation routes was imposed automobile technology and its desire for wide, unobstructed streets and parking spaces. Traffic today infests the city like termites in a wooden house, and worsens as the city’s population grows and grows.

Unlike London, to which Dubliners like to compare their city, there is no road pricing here. An Irish Times article from 1999 promised that road pricing was coming; if so, it's coming at the speed of weekday traffic. Any fool is welcome to drive his or her car to the city centre, assuming s/he can afford the parking and is willing to sit in endless queues of traffic. And there appears to be no shortage of such fools. Many Dubliners have also embraced the North American attitude toward cars, that bigger is better, and that it’s better to drive your enormous SUV alone to work, after swinging by the school to drop the kids off along the way. The result is that on weekday mornings I can walk the 6km from my apartment in south Dublin to Trinity College in little more time than I could drive it.

Not that I have a car here, and would have no need for one if Dublin were my permanent home. The bus service is very good, and there is excellent commuter train and street rail service as well. The main streets into the city centre have dedicated bus lanes, thank goodness, allowing buses to pass the congestion in the other lanes. The problem is that there are so many buses using those dedicated lanes that the buses start to back up and slow one another as they converge on the centre and stop more frequently to drop and pick up passengers. As the streets converge on the centre, they narrow and wind, and I marvel at the skills of the double-decker drivers squeezing their machines through spaces and around corners a well-loaded horse-drawn cart would find challenging to navigate.

Added to the mix are growing numbers of cyclists who shoot along congested streets mined with rail tracks and cobblestones, dodging buses, cars and jay-walkers like X-wing pilots evading imperial TIE-fighters as they converge on the Death Star. Although I commute daily to my office in Waterloo by bike in all kinds of weather in all four seasons, I would not ride to work here. It would be only a matter of time before hitting the deck, splat. Better to be a pedestrian/transit-user.

Speaking of pedestrians, it is clear that Dublin’s city planners are unfamiliar with the concept. It astounds me the complete lack of disregard for pedestrian crossings in this city. Here’s what I mean: a few steps from my office in the Museum Building at Trinity is one of the city’s main railway hubs, Pearce Station. It’s where commuter trains from the main north-south line and the main east-west line converge. It is directly across a street called Westland Row from the eastern gate to the Trinity campus (there is a wall around campus, and entry is restricted to one of four gates). Westland Row and its cross street (Pearce Street) are also corridors for bus traffic into the centre. Each day, literally thousands of people cross Westland Row at the corner of Pearce Street as they walk between the campus and the station. Further complicating matters is that Trinity has offices and lecture halls in buildings adjacent to the station, and at the intervals between classes, surges of students will also be making their way across this intersection. The photo you see above is of this intersection, before the rush.

You might think, given the enormous pedestrian volume, that Dublin city planners might construct an overpass from the train platform to the campus or, at very least, time the traffic signal to match the pedestrian flow. Neither has been done. Instead, the traffic signals across Westland Row allow pedestrians to cross once every two minutes, and allow people precisely 19 seconds to traverse four lanes and an intermediate concrete island before vehicular traffic resumes (I timed it with a stopwatch). The unsurprising result is that crowds of impatient people build up at either side of the crosswalk, with many dashing out into the traffic to jaywalk in a very dangerous fashion.

Unfortunately, this situation is not unique. Throughout the city, on any given working day, mobs of pedestrians are obliged to wait at similar crosswalks while strings of vehicles that collectively contain much smaller numbers of people edge through intersections. It’s especially bad along the banks of the River Liffey, at the heart of the tourist district, where on both sides of the river huge crowds stand at the curb waiting for a brief chance to cross three lanes of traffic. Words really fail to do justice to the stupidity of the situation; it’s as if the city government actually wants make downtown Dublin unattractive and dangerous. Dublin city officials: please, catch a cheap flight to Copenhagen or Stockholm and look around, you could learn a lot.

As astounding to me is that there are private cars parked all over the Trinity campus, belonging to staff and faculty members. On the most valuable and historically significant real estate in all of Ireland, at an institution that claims to be a “green campus” and is divesting from fossil fuels.  I asked some of the staff why, and the answer was simply, “they’ve always allowed parking on campus”. One simply applies for a permit and waits on a list until a space becomes available, and that’s it, bring your car to work. I don’t understand this at all. If the University of Toronto's downtown campus can go car-free, surely so can Trinity. 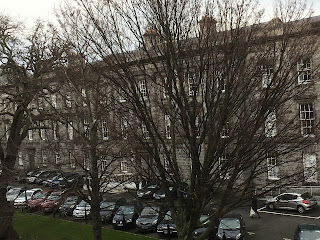 What's with all the cars, Trinity?
.
Posted by Robert McLeman at 3:31 AM