On climate migration and socio-economic inequality 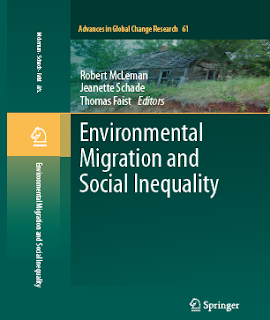 What to do about climate-related displacement and migration will be one of the many subjects discussed next week at the climate change summit in Paris next week (aka COP 21*). So far as I am aware, there is no formal discussion on the main agenda of what to do about climate migration, but the subject will be raised by many groups, delegations, and organizations in attendance.

There are many inequities associated with climate change, one of the greatest being that the people and countries most responsible for causing the problem (Canadians, Americans, Germans, Japanese, and other wealthy nations) are generally less likely to experience the most catastrophic impacts, while countries that make little or no contribution to the problem (like Kiribati, Vanuatu, and Bangladesh, among others) are the ones most likely to suffer first and worst.

Yesterday a reporter from VICE News interviewed me and asked bluntly, in classic VICE fashion, “So are we screwed?”, to which my reply was a mix of “There’s still time to avoid being screwed” and “Some of us will likely be screwed more than others”. We chatted at length about the people most likely to lose their homes or livelihoods, who will be obliged to relocate because of climate change, and when that might happen. In North America it is starting to unfold in the far north, where permafrost is thawing under built infrastructure, where some settlements already need to be relocated because of accelerating coastal erosion, and where traditional communities are prevented by changing ice and wind conditions from traveling to areas where they historically hunted and fished. Such settlements are too small and distant to attract much public attention here in the urbanized southern part of Canada, where people can simply close their eyes and pretend it’s not happening. And again, it’s a case of inequity, where we in the south cause the problem, but people of the Arctic suffer the consequences.

There are other North American examples of environmentally related migration, like increases of migration out of ruralMexico during droughts, the displacement of people following extreme storms like Hurricane Katrina, and an ongoing flow to Canada of urban professionals seeking to leave degraded ecological conditions in low income countries. With the exception of big events like Katrina, most environmentally related migration goes unnoticed, as it embedded within larger streams of migration that occurs for other reasons. Except when the numbers surge suddenly, as they did following Katrina, North Americans are content to ignore the possibility that climate change and other environmental conditions may force people to migrate in or to our part of the world. If we think of it at all, it’s as something that happens in Africa or Asia or other places far away.

In each of the examples of environmental migration I’ve mentioned above there are two common threads: (1) social inequality helps determine who migrates and who doesn’t, and (2) environmental migration exacerbates social inequality. It’s like this: Whenever a damaging environmental event occurs, people adapt as best they can. If they’re lucky, they live in a wealthy jurisdiction with competent authorities and social safety nets in place to help them recover. In reality, few people are so lucky, and so they must draw upon their own personal resources and their own social networks to adapt. Immediately, social inequality rears its head. Those at the top of the socio-economic spectrum have greater resources and more options for adapting, making them less likely to resort to distress migration. At the opposite end of the socio-economic spectrum, the poorest of the poor have few resources with which to adapt, may lack the means to migrate away from the affected area, and may consequently be left trapped in even greater poverty and misery than they were before the event. It’s people in the middle of the socio-economic spectrum that are most likely to migrate, having enough money and resources to migrate elsewhere even if they don’t have quite enough to successfully rebuild and recover in their home community (or their home community is so badly damaged they don’t want to stay in it any longer). In other words, social inequality shapes the migration patterns that emerge following an environmental catastrophe, and social inequality is magnified in the place left behind as the socio-economic middle leaves.

The previous paragraph is a simplification of the complex relationship between environmental migration and social inequality. If you’re interested in a more thorough and detailed treatment, Jeanette Schade, Thomas Faist and I have recently finished editing a book on the subject, coming out next month. The publisher has already set up a website for the book, to which some very knowledgeable researchers have contributed chapters. It contains case studies from a variety of countries, as well as reflections on methodological considerations and legal considerations. Like many academic books, it’s a little pricey for a stocking stuffer, but you should definitely consider suggesting it to the acquisitions person at your local library.

* COP 21 is short for the 21st Conference of the Parties to the United Nations Framework Convention on Climate Change. Under the UNFCCC, signatories agree among other things to meet annually to advance collective action on reducing greenhouse gas emissions.
Posted by Robert McLeman at 2:06 PM