On Yellow Dogs and the Canadian Election 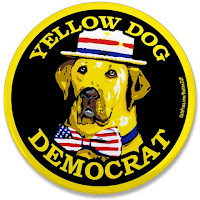 Eastern Oklahoma's finest newspaperman, the late Dick Mayo, once described himself to me as a “yellow-dog Democrat”. That meant that his support for the party was so strong, that even if the party nominated a yellow dog as its candidate in an election, he would still vote for it before he would vote for a Republican. I don't know how common the term is across the rest of Oklahoma, or in the US for that matter, but it's a useful one.

Here in Canada we go to the polls on October 19 to vote for a new federal government. Since Google stats tell me this blog has more readers outside Canada than here at home, I’d best explain briefly how it will work. In our parliamentary system, we vote for a local candidate from one of a handful of parties to represent us in Ottawa, and the party that has the most elected representatives gets to form the government. It's a first-past-the-post system, in which candidates do not need to win a majority of votes, but simply need to get one more vote than any of the other candidates. Since in most ridings there are at least four candidates, sometimes as many as five or six, it typically means that no candidate ever wins a majority of the votes. It also means that the party that forms the government might only receive 35 or 40% of the votes cast nationwide. It’s a lousy system, but so far no one can find a better one we can all agree on.

Over the course of my life I have voted for candidates representing all the main political parties at one time or another, but for the past decade I’ve been a yellow dog Green party supporter. So take the comments that follow in the remainder of this posting in the context that they come from someone who votes knowing that his candidate is unlikely to ever win. In case you're wondering, the Green party held two seats in the last Parliament, but one of those was actually a representative of the New Democratic Party (NDP) who switched parties after he was already elected. The other seat is held by Elizabeth May, the national leader of the Green party, who represents a riding on the British Columbia coast that has a disproportionately large population of greenies.

According to the media commentators and the polling companies, this election is too close to call. Each of the three biggest political parties - the Conservatives, the Liberals, and the NDP - have between 20 and 35% support nationally (the Greens poll at around 5%). For American readers, who may not be familiar with our parties, the Conservatives and Liberals are roughly parallel to your Republicans and Democrats respectively, but up here what constitutes right-of-centre would fall pretty much dead centre in your system, and our centre falls to your left. The NDP used to be the most left-wing of our parties, favoured by labor unions especially, but in recent years they have been tacking towards the political middle ground.

Unlike American politics, Canadian federal elections tend to focus on fairly mainstream issues. For example, the main issues in the present election have been such things as tax cuts for middle-class, whether the government should be always trying to balance its budget, whether we should be spending more on infrastructure for cities, and what Canada should be doing to help with the Syrian refugee crisis. The most contentious issue has been a discussion over whether Muslim women who wear a niqab should be required to show their faces at citizenship swearing-in ceremonies. It's a pretty small issue in and of itself, but it raises an important discussion about the amount of accommodation Canadians are willing to make for people from other cultures within our multicultural model. Although the discussion has not always been well informed, it has so far been more respectful than comments about Mexican-American immigrants by a would-be US Republican leadership candidate, or congressional committee hearings about Planned Parenthood.

It’s been pretty plain to me for about a year now that the current Conservative government under Prime Minister Stephen Harper is toast. I could still be proven wrong, but I doubt it. Canadians get tired of their prime ministers once they've been in power for 8 to 10 years, and Mr. Harper is no exception. The last two prime ministers who served for any significant amount of time - Liberal Prime Minister Jean Chretien and Conservative Prime Minister Brian Mulroney before him - both resigned under pressure from their fellow party members, who realized they had no hope of winning another election with their existing leader. Mr. Harper proactively avoided this happening to him by exercising ruthless control over his fellow party members, driving out anyone who might have leadership aspirations of their own. The result is that the Conservative party now has a de facto yellow dog for a leader.

I feel sorry for local Conservative party candidates in this situation. Even though this election should be as much about their qualifications as it is their leader’s, it's really all about the leader this time. This is my first election voting in the riding of Waterloo, which is presently represented in Ottawa by a Conservative by the name of Peter Braid. From what I have observed of him over the last few years, he is an earnest, hard-working fellow who diligently turns out for every community event under the sun. On a couple occasions I’ve had to contact him or his office, and each time received prompt and courteous responses. The general consensus I hear from people in my neighborhood is that they think well of Peter, but they can't stand his leader. So unless the yellow dog Conservatives in Waterloo outnumber voters for any of the other candidates, we'll probably have a new representative in Ottawa on October 20. Since I'll be voting Green I don't really have a horse in this race, but I would be happy with any of our local candidates, regardless of their party affiliation. All of them have useful experience, strong CVs, and are well spoken.

As for who may end up being our Prime Minister on October 20, it’s too bad it won’t be Ms. May. It’s pretty clear that many Canadians think she would make a fine Prime Minister, but they don’t take the Greens serious enough to vote that way. It's too bad that people feel they can't vote for the person they want, and not instead vote strategically in hopes of preventing someone they don't want to win from winning. C’est la vie. As for Mr. Harper, he plays a nasty, mean-spirited game of politics that I do not support, but since you shouldn't kick a man when he's down, I'll say no more about him. As for the two remaining options for Prime Minister, I can see pros and cons in both of them. If I were to pick one, I would probably support Mr. Trudeau, the Liberal party leader, and my reason for this has more to do with Canada's image on the world stage than it does with the domestic qualifications of him or his rival, Mr. Mulcair of the NDP. Under the Conservative government of Mr. Harper, Canada's international reputation has suffered tremendously. No one takes us seriously anymore. Teddy Roosevelt said, “walk softly and carry a big stick”; we do the opposite. We are seen in many parts of world as being part of the problem and not part of the solution, on issues such as climate change and the Syrian refugee crisis. We lecture others about what they ought to do, but act like a tightfisted bunch of Ebenezer Scrooges only interested in looking out for ourselves. That's not how I want people in other parts of the world to think of me or my country, and I suspect few other Canadians feel the same way either. Mr. Trudeau projects youth, energy, and a can-do kind of attitude, and I think that would be a refreshing image for our country's leader.

So for what they're worth, there you have my analyses of Canada's impending election, and you can check back here on October 20 to see whether my prognostications were correct or not.

Posted by Robert McLeman at 6:58 AM