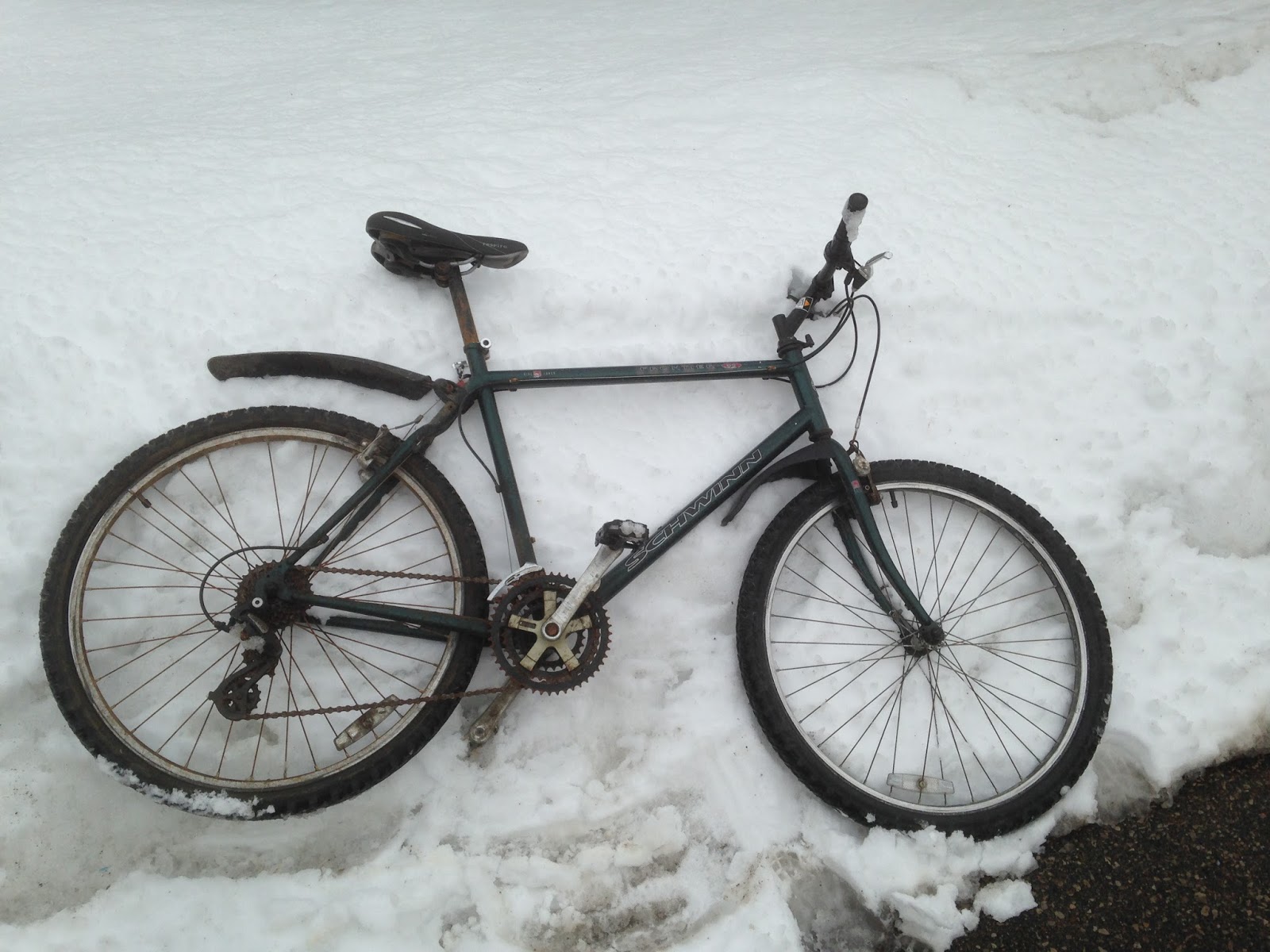 It is with great sadness we announce the sudden passing of Betsy (née Schwinn Frontier) on March 14, 2014, beloved bicycle of Robert McLeman of Waterloo, Ontario.

Betsy was born in 1995 in the USA, when Schwinn was still a leading family of quality, American-made bicycles. She was adopted by Dr. McLeman the following year at the now-closed Seattle Cycles orphanage. Although at home in the city, where she enjoyed living in the Center of the Universe, visiting Discovery Park, and rolling down Lake Washington on car-free Bike Sundays, Betsy was born for the mountains. In her youth she and Dr. McLeman enjoyed many days both sunny and rainy on the trails at Washington’s Tiger Mountain State Park. At an early age she made her memorable first trip to the Olympic National Park, and later toured Mount St. Helens, where she and her loving companion narrowly avoided colliding with an elk only to later that same day experience their first big endo as they swerved to avoid a basking snake. Fortunately neither was seriously hurt, although Betsy did require a saddle transplant, the first of many injuries she overcame during her full life.

In 1999, Betsy moved to Austria, and quickly came to love the trails and steep climbs of the Wienerwald (Vienna Woods). Although other bicycle families of her class had moved on to foreign construction and lighter materials, Betsy stood out from the younger crowd because of her solid, American-made steel frame and timeless green-and-black camo styling. Once, on the incredibly steep grade from Kahlenbergdorf to Kahlenberg via the Eisernenhandgasse, Betsy was overtaken on the climb by a younger, lighter bicycle whose stylish European rider complemented her, calling out to her companion, “You climb this hill on that? You are like alien!” Betsy’s most unforgettable moments in Europe came on an excursion to Tuscany, when she had the privilege of travelling roads built by the Roman Empire in a time long before her ancestors had even evolved from lower forms of wheeled transportation. She experienced a brief stay in a clinic in Greve in Chianti on that trip, where she received a derailleur transplant (Roman roads are built from cut stone and not gentle on bicycles). Fortunately, the Italians are a bicycle-loving people with talented specialists even in Slow Cities, and Besty emerged from surgery as good as new.

In 2002, Betsy and her companion moved to Canada, where they sojourned in Guelph and Cambridge before settling in Ottawa. Far from the mountains of her youth, Betsy happily accepted her new position as a commuter bicycle, exchanging the freedom of forest and trail for the rigours of city streets. Despite regular care and annual check-ups at one of Canada’s finest bicycle clinics (Ottawa’s Full Cycle), urban life gradually took its toll on this brave machine. On two occasions she and her companion narrowly avoided being fatally struck by careless drivers, but the second near-miss left Betsy’s rear wheel with a warp that would plague her for the remainder of her days. The salt that is liberally applied to Ontario roads in winter played havoc with Betsy’s moving parts and steel frame, requiring ever greater levels of cleaning, maintenance, and chain transplants.

Not knowing she would have but eighteen more months of life before her, Betsy and Dr. McLeman moved to Waterloo, Ontario, in 2013, where she worked harder than ever ferrying her devoted companion to Wilfrid Laurier University. The two celebrated the addition of a new member to their family, when Dora of the Kona Dew family was adopted in August 2013. Dora being narrow-tired and light, the heavily treaded and sturdy Betsy kept her role as principal conveyance during the winter of 2013-14, which will go down in the annals as having been among the fiercest in Betsy's lifetime. Suffering from serious arthritis in her brakes and derailleurs, Betsy’s hind spokes gave way last Friday morning, shortly after 9 am, in the course of her usual commuting responsibilities. She was assisted back to her garage, where Dr. McLeman pronounced her injuries fatal.

Betsy’s remains will be consigned to Recycle Cycle where, in the Buddhist tradition of the mountains where she always felt best, it is hoped she will be reincarnated in whole or in part. In lieu of flowers, those who share Dr. McLeman’s loss are asked to honour Betsy’s memory by taking a child cycling.

Posted by Robert McLeman at 6:30 AM

I've got a couple of wheels with intact spokes in the garage that are destined for Recycle Cycles once I get around to the dropoff. If the fates and sizes line up, maybe their future lives are connected to hers...